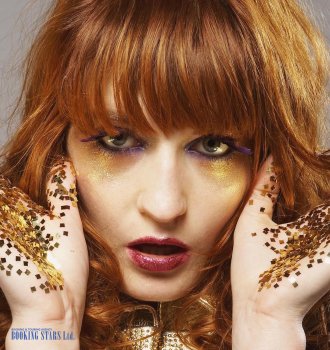 The indie rock band Florence and the Machine was established in England, in 2007. The current lineup includes Florence Welch and Isabella Summers. The band is mostly known for such hits as “The Dog Days Are Over”, “You’ve Got The Love”, “Spectrum (Say My Name)”, and “Shake it Out”.

Florence Welch’s father was Harvard professor and her mom was an advertising specialist. She was an excellent high school student. However, Welch suffered from a variety of medical conditions such as ataxia, dyslexia, depression, and insomnia. After high school, Florence enrolled into the Camberwell College of Arts. However, she soon dropped out to pursue a music career.

In 2007, Florence recorded several songs with the band Ashok. Some time after that, the band released an LP that contain mostly Florence’s’ songs. Later Welch became an official manager of the band but soon realized that she made a wrong decision and cancelled the contract. The same year, Florence and her friend Isabella Summers decided to form a band. They called it Florence and The Machine, which came from an old joke. The band’s manager was Mairead Nash.

In 2009, the band released the first studio album Lungs. It became a huge hit, selling over 6 million copies worldwide. The LP topped the UK Albums Chart and reached the 14th spot on Billboard 200. The number of platinum certifications the LP got is mind-boggling. One of the most famous singles from that album was “Kiss with a Fist”. It became part of the Wild Child and Jennifer’s Body soundtracks. The second single “Dog Days Are Over” was also a hit.

In 2011, Florence and the Machine released their second studio album Ceremonials. The LP topped UK Albums Chart, Irish, New Zealand, and ARIA charts. It reached the 6th spot on Billboard 200. The lead single from that album “Shake It Out” became an international hit.

In 2015, the band released their third album How Big, How Blue, How Beautiful. The LP was a big success, topping a variety of charts, including Billboard 200, UK Albums Chart, and ARIA Chart. So far, the album sold over 2 million copies worldwide. The band continues to record new music and performs live.

Book Florence And The Machine