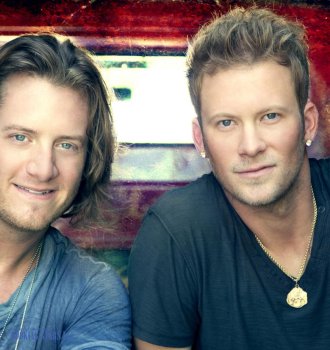 Brian Kelley from Florida and Tyler Hubbard from Georgia met in 2008 while studying at Belmont University. They performed together at the local clubs. In 2010, the musicians recorded an independent EP Anything Like Me and uploaded it to the Internet. They came up with a band name by combining the states they were born in. Georgia and Florida share a state border.

One day the musicians met with a talented producer Joey Moi. Together they recorded another EP It’z Just What We Do under the label Big Loud Mountain. The album came out in 2012 and received positive reviews from the critics. The EP reached the 18th spot of Top Country Albums charts and climbed to the 105th position on Billboard 200. The album also made it into Top Heatseekers Chart as well.

The leading hit from the EP was “Cruise”. Right after the release, it reached the 16th spot of Billboard Hot 100. Its popularity and good sales on iTunes attracted the attention of music managers. As a result, the band signed a contract with Republic Nashville and Big Machine Label Group. With time, the song topped Country Airplay and Hot Country Songs. It made it to the 4th position of Billboard Hot 100 and conquered Canada Country Chart. By 2016, the song earned a diamond certification from RIAA for selling over 7.5 million copies. The band set a record because none of the country singers managed to achieve such sales in the past.

The first FGL’s 1st studio album Here's to the Good Times came out in 2012 under Republic Nashville. The LP debuted on the third spot on Billboard Top Country Albums Chart and reached the 10th spot on Billboard 200. By April 2017, it was certified platinum by RIAA twice for selling over 2.3 million copies.

Besides “Cruise”, four more singles from the LP topped the charts. "Get Your Shine On", "Round Here," and "Stay" earned two platinum certifications. Meanwhile "This Is How We Roll" sold over 2.2 million copies.

By the end of 2013, Florida Georgia Line collected an impressive number of awards, including Academy of Country Music Awards and American Music Awards.

In July 2014, the band released its first single from the upcoming 2nd LP "Dirt". The song debuted on the 11th spot of Billboard Hot 100 and the 10th spot on Canadian Hot 100. Three months later Anything Goes came out. It was produced by Joey Moi. The LP immediately topped Billboard 200 and Canadian Albums Chart. In just a few months, it earned a gold certification from RIAA. A year later, it became platinum in the USA and Canada. At the end of the year, the band earned a variety of awards.

In 2015, the duo was actively touring the country. It became almost impossible to book Florida Georgia Line for any private event. To support their second album, the musicians went on the Anything Goes Tour.

In April 2016, the band released the lead single from the upcoming album. "H.O.L.Y." climbed to the 18th spot of Hot Country Songs. It also topped Country Airplay and reached the 14th spot of Billboard Hot 100. The single received four platinum certifications from RIAA and earned a Billboard Music Award as "Top Country Song."

The duo presented its third studio album Dig Your Roots in 2016. It climbed to the 2nd spot of Billboard Hot 100 and went platinum.