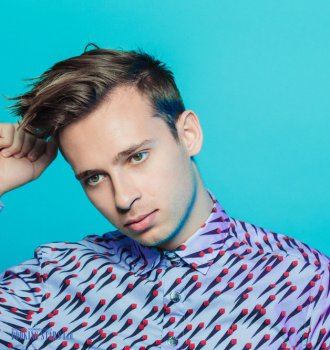 Flume’s real name is Harley Edward Streten. He was born on 5 November 1991 in Sydney. His father was a music producer and helped Harley discover the nuances of the industry rather early. Streten’s mother was a gardener and a teacher. The singer got a good education. He spent his childhood on the northern beaches of the Australian capital. Harley began writing lyrics and music when he was just 13 years old. At that time, he was a big fan of house music. In 2010, the singer presented his first songs, "Flow" and "Fizz", as well as several remixes.

A while later, he performed the song “Possum” as part of the Triple J Unearthed project. The artist’s work caught the attention of the music industry players. In 2011, an independent record company Future Classic offered Streten a contract. They helped him record "Over You", "Sleepless", and "Paper Thin". Later, these songs were featured in the singer’s debut EP, which he called Sleepless. The same year, Harley adopted the pseudonym Flume.

It took the young artist a year to release his debut LP, Flume. The album became highly successful. It featured such artists as Moon Holiday, Chet Faker, Jezzabell Doran, and New York rapper T-Shirt. It topped Australian iTunes charts and came in second on ARIA Albums Chart. The LP was certified platinum twice in Australia and earned gold in New Zealand.

A month after the album’s presentation, the artist signed a contract with Mom + Pop Music. Together they released the debut LP in the USA. American critics approved of the albums and gave it high scores. At that time, many organizers tried to book Flume for their events in Australia. The young artist often agreed in order to gain performance experience.

In 2013, the singer recorded his second EP, Lockjaw. It featured three songs, What About Us", "Drop the Game", and "This Song Is Not About a Girl". The first one reached the 53rd spot of ARIA Singles Chart and 13th position of ARIA Top 25 Dance Singles Chart. The latter reached the 52nd and 12th spots of the above charts accordingly. The same year, Flume released several successful singles, including "Hyperparadise", "Sleepless”, "Holdin On", and “On Top".

In 2013, the artist earned a number of prestigious AIR Awards in several categories. Flume also received four ARIA Awards, one of them being Producer Of The Year. The same year, he went on a tour of Australia called "Infinity Prism Tour". More than 40,000 tickets were sold to his concerts. The next year, he attended the Lollapalooza festival.

In 2015, together with Andrew Wyatt, the musician recorded “Some Minds”, which reached the 27th spot of ARIA Top 100 Singles Chart and climbed to the 19th position of US Hot Dance/Electronic Songs.

The year 2016 was busy for the artist. He recorded his second LP, Skin and an EP, Skin Companion EP 1. The latter featured four tracks, "v", "Heater", "TRUST", and "Quirk". It climbed to the 29th spot of ARIA Albums Chart and came in third on US Top Dance/Electronic Albums Chart. The LP was even more successful. It topped the above charts and appeared on the charts in Belgium, New Zealand, the UK, Germany, and more. The album brought Flume a Grammy award for Best Dance/Electronic Album.

In 2017, the artist recorded one more EP, Skin Companion EP 2. It climbed to high spots on the charts and brought Flume even more international popularity. The same year, he earned a prize at APRA Music Awards as Songwriter of the Year.