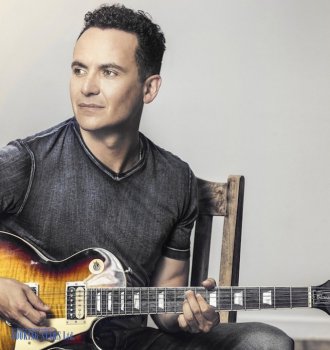 Juan Fernando Fonseca was born on May 29, 1979, in Bogota. The singer fell in love with music when he was just a boy. When Juan turned 12, he recorded his first song all on his own and sold 500 copies to his family and friends.

In 2002, after graduating from Berklee College of Music, Fonseca signed a contract with EMI Columbia and recorded his debut album, Fonseca. The LP didn’t make it into the popular charts but was very well-received in his native Columbia. Local radio stations gladly played several songs from the album.

In 2005, Fonseca recorded his next album with EM Columbia, Corazon. The single from the LP “Te Mando Flores” became his first international hit. It topped the Columbian single chart and made it into Billboard Hot Latin Tracks, Latin Pop, and Latin Tropical Charts. One of the top Columbian radio stations kept the song on the top list for 22 weeks. The single brought Fonseca his first Latin Grammy Award for The Best Tropical Song. Two more singles from the album “Hace Tiempo” and “Como Me Mira” also became very popular, both in Columbia and abroad.

In 2008, the singer recorded another successful album Gratitud. The LP was certified platinum 5 times and made into the Mexican Albums Chart. In addition, the LP reached top spots on Billboard Latin Music Charts.

After Gratitud was released, Fonseca went on a long tour Gratitour to support it. He visited 25 countries. In the USA, he performed in 16 cities where he found thousands and thousands of new fans. Two singles from the LP, “Enredame” and “Arroyito”, were especially popular. They earned good spots on Billboard charts and got into the top 10 of the Columbian Singles Chart.

At that time, Fonseca was very involved in different activist movements. He decided to support the president’s program, Canto Conmigo, The singer also worked with UN to support the program to end violence against women. He gave a charity concert in Guatemala. Fonseca and another famous artist Juanes supported the “Right To Dream” campaign.

In 2011, Fonseca released another album Illusion. In just four months, the LP earned several platinum certifications in Columbia. The album reached the 11th spot in the US Tropical Albums chart.

Fonseca went on a tour to support the album. He visited more than 17 cities. Three popular singles from the album “Desde Que No Estas”, “Eres Mi Sueno”, and “Ay Amor” reached good spots on the charts. Even though the LP was rather popular, it wasn’t as commercially successful as Gratitud. However, it was still tough to book Fonseca for any private or public event due to his immense local popularity.

In 2014, Fonseca started working on a new album Conexion. By the middle of 2015, the first single “Entre Mi Vida y La Tuya” was released. It conquered Billboard Latin charts and became very popular in Columbia and Venezuela. The album earned four platinum certifications. After the release of the album, Fonseca received two important awards, Sesac Latina Contemporary Icon Award and Premio Triunfador, which showed how much he was valued in Latin America.

In 2017, Fonseca signed a contract with Magnus Media, Established by Mark Anthony. At the same time, he received another ASCAP Latin Music Award.

Fonseca is a very popular artist both on stage and on social media. For example, he has over 3.7 million followers on Twitter.