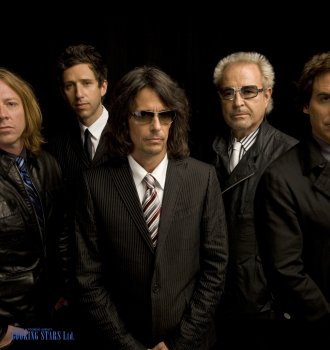 The rock band Foreigner was formed in New York, in 1976. The current lineup includes Mick Jones, Thom Gimbel, Jeff Pilson, Kelly Hansen, Michael Bluestein, Bruce Watson, and Chris Frazier. The band is mostly famous for such hits as “Waiting for a Girl Like You”, “I Want to Know what Love Is” and “Urgent”.

Together with Journey, Styx, and REO Speedwagon, the band Foreigner is one of the melodic rock leaders. The guitarist Mick Jones (December 27, 1944) began his career with the bands Nero and the Gladiators, Spooky Tooth, and The Leslie West Band. In 1976, he decided to form his own band. Back then, the lineup included Lou Gramm, Dennis Elliott, Al Greenwood, and Ed Gagliardi. The lineup changed several times. Eventually Mick was the only person left from the original band members.

Jones and Gramm formed an excellent songwriting tandem. One of their first songs “Cold As Ice” became a big hit. In 1977, after signing a deal with Atlantic Records, the band released their debut LP Foreigner. It included such hits as “Feels Like The First Time” and “Long, Long Way from Home”. The LP stayed in the top 20 on Billboard 200 for almost a year.

The band’s second album was even more successful. Thanks to the lead single “Hot Blooded: the LP Double Vision got higher chart spots than the predecessor. Back then, Foreigner was at the peak of its fame and all the concerts were sold out. The third album Head Games (1979) was also a big success and was certified platinum in the US five times. The same year, the band went through some lineup changes. However, it didn’t hurt the success of the next album 4, which was the first Foreigner’s LP to top Billboard 200.

In 1984, the band released their fourth album Agent Provocateur. The hit single from that album “I Want to Know What Love Is” became a huge international hit. The band released four more albums, the latest one to date being Can’t Slow Down (2009). These latest albums managed to get into the charts but were by far less successful than Foreigner’s previous work. The band continues to perform live.