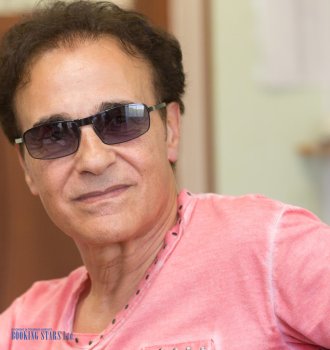 Elli Robert Fitoussi was born on 1 January 1947 in Tunisia. He became famous under a pseudonym F. R. David.

In the 1960’s, Elli Robert began his music career under the name of Robert Fitoussi. He was a singer, bass guitar player, and songwriter in the band called Les Trèfles. Later the band changed its name to Le Boots. The group released one EP, but it was never commercially successful.

In 1967, the musician adopted the pseudonym F.R. David and began a solo career. He created several cover versions of songs, which were popular at the time. Among them, there was "Il Est Plus Facile" – a cover version of The Beatles’ "Strawberry Fields Forever".

Sometime later, together with Sonopress & Carrer, Fitoussi created a recording label Aztec Records. Working with Michael Haubrich, the musician tried himself as a producer and colloborated with several bands, including Cockpit, with which they recorded an album and three singles. Then the company worked with such artists as David Cast, Doc & Prohibition Group, Ragga, Alain Maria, Freddy Meyer.

In the 1970’s Fitoussi formed a rock band David Explosion, but it didn’t become popular. In 1975, he joined another rock band Les Variations and helped them record their last album Café De Paris.

In 1978, as part of the duo King Of Hearts, F.R. David released a studio album Close, But No Guitar. After the duo fell apart, the musician returned to his solo career. He also created a new image. At the concerts, Fitoussi always wore sunglasses and played a white guitar.

David’s music career was on the rise in the 1980’s. In 1981, the artist recorded his most successful hit to date "Words". It initially came out in France and then was re-released in other European countries. In 1983, the song appeared in the USA and UK. The single became an international hit and topped Austrian, Belgian, Danish, German, Irish, Italian, and Norwegian charts. It also came in second in the UK, Netherlands and France. The song sold over a million copies in France and 8 million copies in the rest of the world.

The debut album with the same name as the single came out in 1982. It was released under Carrere Records. Besides “Words”, the LP featured nine more songs. All but one was written by Fitoussi. He became very popular. Many organizers were hoping to book F.R. David for their events.

In 1984, the artist released his second LP Long Distance Flight. However, it was much less successful than his first album. The next LP, Reflections, came out in 1987. It wasn’t too successful either.

In 1992, the musician released his last single to date, "I’ll Try to Love Again". Then he went back to writing songs for other artists, putting the solo career on hold.

In the late 2000’s David recorded two more albums The Wheel (2007) and Numbers (2009). The latter featured songs, which Fitoussi wrote with other songwriters.

In 2013, the artist presented the last LP to date called Midnight Drive. It featured "So Good", "The Things I Missed", "Control", and several other songs.