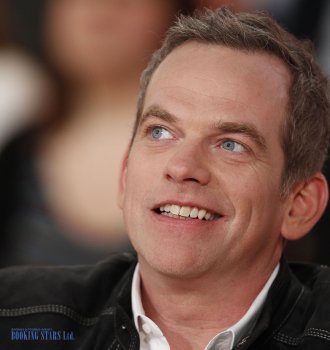 Garou (Pierre Garand) was born 26th June, 1972, in Quebec, Canada. He is mostly known for his role as Quasimodo in the musical Notre-Dame De Paris. Notably, Garou was part of both English and French cast. His most famous songs are “Sous Le Vent” and “Je Suis Le Meme”.

When Garand was just three years old, his parents bought the kid his first guitar. Two years later Pierre started playing the piano. When he was young, Garand wanted to become an archeologist, not a musician. However, when he turned 14, he joined a band and started performing on the school stage. After finishing high school, Pierre joined the army as a trumpet player.

In 1992, Garand returned from the army. He was desperately looking for ways to earn money. Each night he was going to the local nightclubs where he played the guitar and sang. One day Garand got a chance to perform during a break at a local celebrity concert. He was noticed by the bar owner who gave Garou a job.

In 1995, Garou established a band called The Untouchables that played rhythm and blues music. The band gave local concerts. Two years year, Garou was noticed by Luc Plamandon, who wrote songs for the French version of Notre-Dame de Paris. Pierre was cast for the role of Quasimodo.

In 1999, Garou revived several awards, including World Music Award for his song “Belle”, which topped French charts for 33 weeks and was named the best song of the second half of the 20th century. The same year Garou and the cast of Notre-Dame de Paris joined Celine Dion at her New Year’s Concert.

In 2000, Garou released his first album Seul, which was a big hit. It reached the second spot on the Canadian Albums Chart and sold over 2 million copies in Europe (1.5 million in France). A single from that album “Sous le Vent”, which he performed with Celine Dione, became one of Garou’s most famous songs.

Garou is a great choice for your event! Book a legendary singer on our website online!