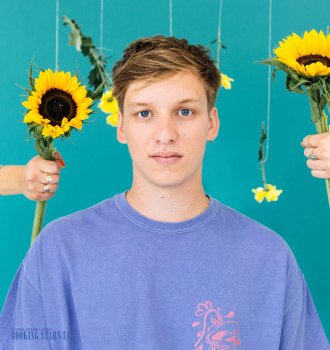 George Ezra’s full name is George Ezra Barnett. He was born on 7 June 1993, in Hertford, UK. George wanted to become an artist since childhood. After finishing high school, he moved to Bristol to enroll in British and Irish Modern Music Institute. In college, the young men finalized his plans for becoming a blues and rock singer. In 2012, his work caught the eye of the representatives of Columbia Records. Soon he signed a contract with the label.

The jump-start of George’s career happened in 2013 at Glastonbury Festival. It’s considered one of the major music events in the UK. The annual event is being arranged since 1970. Right after the festival, Ezra released his debut single "Did You Hear the Rain?". It wasn’t an overnight hit but became popular enough to appear on French and Austrian charts.

In March 2014, the singer released his second single “Budapest”. It became a huge hit. The song topped New Zealand and Austrian charts. It came in third in the charts of the UK and Germany, climbed to the fourth spot in France and Ireland, and settled on the fifth position in Australia. The single brought the young artist numerous awards and nominations, including Song Of The Year at BBC Music Awards and the Best British Single at BRIT Awards. At MTV Video Music Awards, he was nominated for the title of Artist To Watch.

The song was featured in Ezra’s debut studio album Wanted on Voyage, which he presented in June 2014. Besides the popular single, the LP included such songs as "Blame It on Me", "Cassy O'", "Barcelona", "Drawing Board", "Listen to the Man", "Leaving It Up to You", "Over the Creek", "Stand by Your Gun", "Spectacular Rival", and "Breakaway". The single "Did You Hear the Rain?", which with time became very popular, was part of the album as well.

Singles "Blame It on Me", "Cassy O'", and "Listen to the Man" showed up on British, Belgian, Austrian, German, Irish, New Zealand, and Australian charts. The former turned out to be the most commercially successful song out of them all. It earned platinum certificates in the UK and Australia.

The album itself became commercially successful. It earned four platinum certifications in the UK and several more in other countries. The LP also topped UK Albums Chart and came in fourth in Australia and New Zealand. The album settled on the 19th spot of Billboard 200. At that time, many fans tried to book George Ezra for their events.

The year 2015 was busy for the artist. He toured North American as an opening act for Sam Smith and Hozier. In July, he participated in the Osheaga festival in Montreal. The same year YouTube Music Awards called him one of 50 artists to watch. He also earned one more BRIT Awards nomination.

In 2017, after a short break, the artist announced a UK and Ireland tour. In support of his next LP, Ezra released singles "Don't Matter Now" and "Paradise". Both of them were commercially successful. In March 2018, the musician presented his second studio album, Staying at Tamara's. The LP already earned a platinum status in the UK

George is actively working on new songs and performing live all over the world.