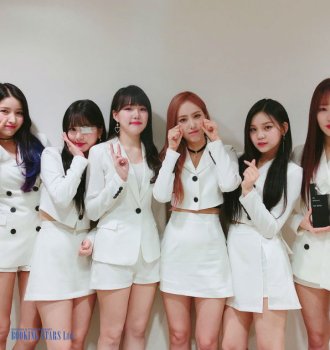 GFriend debuted in Seoul in 2015. Its lineup includes five young women, Yerin, Sowon, Yuju, Eunha, SinB, and Umji. The decision to create a band belongs to the label Source Music. It helped the girls record their first EP, Season of Glass. The album featured five songs, “Season of Glass”, "White", "Neverland", and two versions of “Glass Bead". The latter reached the 25th spot of South Korea Gaon Digital Chart. The EP earned great reviews from critics and listeners. It reached the 9th spot of South Korea Gaon Albums Chart. In just a couple of weeks, the group became famous all over the world. On 28 January 2015, Billboard put GFriend on its list of the groups likely to become famous in 2015.

In just a few months, the band presented its second EP, which the artists called Flower Bud. At about the same time, they recorded a music video for the single "Me Gustas Tu". At the moment, the video has over 15 million views on YouTube. The single sold 2.5 million copies in South Korea. The EP itself reached the 6th spot of the national chart.

In September 2015, GFriend became the only South Korean girl group to be nominated for "Best Korean Act" at MTV Europe Music Awards. The rest were boy bands. At that time, many fans wanted to book GFriend for their private events.

In January 2016, the group released its third EP, Snowflake. The album featured such hits as "Rough", "Luv Star", "Say My Name", and "Someday". The album climbed to the 2nd spot of South Korea Gaon Albums Chart. It also became the first EP to appear on Billboard’s World Albums Chart, settling on the 10th place.

In July 2016, GFriend presented its debut LP, LOL. The album turned out highly commercially successful. It climbed to the 3rd spot of South Korea Gaon Albums Chart and settled on the 7th position of Billboard’s World Albums Chart. The single "Navillera" became a hit. In the summer of 2016, it appeared on such shows as The Show on SBS MTV, Show Champion on MBC Music, Music Bank on KBS, M Countdown on Mnet, and Inkigayo on SBS.

In 2017, the artists released two EPs, The Awakening и Parallel. Both of them reached high spots on the charts in South Korea, Japan, and Taiwan. The most popular songs of 2017 were "Fingertip", "Love Whisper", and "Summer Rain". The group filmed music videos for each of them. All music videos collected millions of views on YouTube.

The year 2018 began with the recording of a new EP. Time for the Moon Night came out in April. It topped South Korea Gaon Albums Chart and came in sixth on Billboard’s World Albums Chart. The album became popular in Japan and Taiwan as well. Songs "Time for the Moon Night", "Love Bug", "You Are My Star", "Bye", and "Flower Garden" turned into hits.

In May 2018, the Japanese label King Records promoted the compilation album, Me Gustas Tú (今日から私たちは) – GFriend 1st Best, in Japan. The album reached the 10th spot of the national Japanese chart.

In 2019, the group is planning to release another DVD, Season's Greetings "Be in Full Bloom".