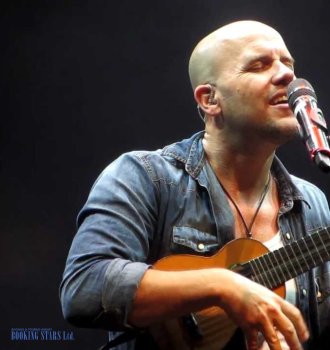 Gian Marco Zignago Alcover was born on 17 August 1970 in Lima, Peru. His mother Regina Alcover was a popular Peruvian actress. His father Javier Zignago was a famous composer mostly known as Joe Danova. Gian Marco was growing up in Monterrico neighborhood, where he went to school and studied music. When he was 11, the boy and his mother recorded a song together. “Papito Leñas Largas” lay the foundation for Gian Marco's music career.

A year later, Gian Marco appeared on Argentinian TV in the program Domingos Gigantes. Another year later, he was invited to sing on the show La Revista de las Saturdays en Caracas. Gian Marco amazed the audience by the unusual voice and obvious talent.

When Gian Marco turned 18, he went to Santiago to study graphic design. However, he quickly realized that his life was lacking something…music. Gian Marco started singing in local clubs and won the attention of the fans due to his special style. A year later, he returned to Lima and one of his songs was chosen for the OTI festival. At the festival, Gian Marco was noticed by Discos Independientes and offered a contract.

In 1990, the singer recorded his debut album, Gian Marco. The LP was nominated for a Latin Grammy Award. Two years later, Gian Marco released his second album Personal. It was less popular than his first LP. At the end of 1990’s, Gian Marco decided to become a composer. He was also hired as a host of a famous show Campaneado. Thanks to his work on the show, the singer’s popularity started growing faster than light. Many organizers were hoping to book Gian Marco for their events but it was usually very hard due to his busy schedule.

In 2002, Gian Marco went to the USA hoping to get international recognition. There he started working together with Emilio Estefan. Together they helped record Mandy Moore’s LP Mandy Moore. At the same time, Gian Marco was working on his sixth album A Tiempo. The LP was popular in many countries and nominated for three Latin Grammy Awards.

In 2005, the singer celebrated 15 years since the beginning of his career. The anniversary concert was attended by more than 40,000 people.

The singer recorded six more studio albums. He worked as a composer and wrote songs for many celebrities, including Marc Anthony, Alejandro Fernandez, Joe Secada, and many more. He continues to write and record new music and performs live.