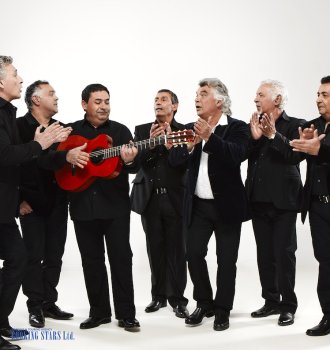 Gipsy Kings was formed in 1978, in Arles, France. The founder of the band was a popular flamenco musician Jose Reyes. His sons Nicolas and Andres Reyes joined the band. He also invited his wife’s nephew Chico Bouchikhi, but he shortly left to form his own group. The band got the name of its founder – Los Reyes. The group worked in the local bars and clubs of Arles. They performed different vibrant and romantic melodies and conquered the local public. The wonderful voice of Nicolas Reyes coupled with his brilliant guitar-playing skills was a big hit.

After Jose Reyes’ death, more members of the Reyes family joined the band: Francois and Patchai Reyes. The Baliardo family (Tony, Paco, and Diego) also became a part of the group. While enjoying the local popularity, Los Reyes decided to release two albums. However, they didn’t make it into the charts. The band continued performing all over the country. They attended local festivals. The fans were amazed at their enticing flamenco melodies. In the early 1980’s, the band members changed the name to Gipsy Kings.

In 1986, Gipsy Kings met a producer Claude Martinez, who was promoting young bands. With his help, their work became even more popular. The talented band members mixed gipsy music from the south of France with modern, vibrant songs, and Latin jazz and samba. The band’s creations also included romantic melodies, African tunes, Arabic chants, and the elements of pop music. The fans were ecstatic about the band’s music experiments.

In 1987, the band recorded two hits “Djobi Djoba” and “Bamboleo”. They brought the band international popularity and became famous for many years to come. These songs helped the band sign a contract with Sony Music and release their third LP Gipsy Kings. The album made it into the top-10 of many European charts. It stayed in the UK charts for over 40 weeks. A little later, Gipsy Kings conquered the American audience by performing at the New York New Music Seminar.

With time the band started experimenting with rumba, salsa, samba, soul, and even R’n’B. Eventually, the exotic mix attracted more and more fans. The band’s concerts were selling out. However, after some time, the group decided to stop experimenting. Instead, the members started honing their skills. Many organizers hoped to book Gipsy Kings for their events, but it was hardly possible.

In 2013, the band recorded Savor Flamenco. The LP brought them a Grammy Award for Best World Music Album.

Gipsy Kings worked with such famous musicians as Joan Baez, Ziggy Marley (Bob Marley’s son), and Captain Jack. Their interpretation of the song "You've Got a Friend in Me" made it into a famous animated movie Toy Story 3.

Today, Gipsy Kings are traveling all over the world, giving live concerts.