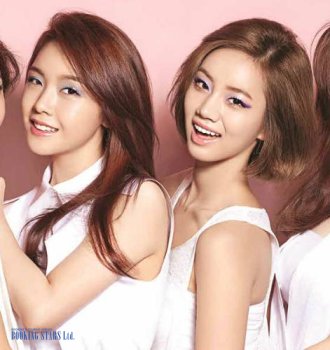 The current lineup of Girl’s Day includes Sojin, Minah, Yura, and Hyeri. Initially, there were other members in the group. However, two of them, Jisun and Jiin, left two months after the debut to pursue other goals. To replace them, the label invited Yura and Hyeri. The third member of the initial lineup, Jihae, left the band for personal reasons in 2012.

The initiative and the funding for the band’s creation belongs to Dream Tea Entertainment. Its managers arranged the recording of the first single "Tilt My Head" in July 2010. Two days later, the musicians presented a debut EP, which they called Girl's Day Party #1. The album reached the 12th spot of South Korea Gaon Albums Chart. Later that month, the group presented two music videos for the singles "Tilt My Head" and “How About Me". Both videos collected thousands of views on YouTube. The fans started trying to book Girl’s Day for private events.

In 2011, the group released a new EP, Everyday. It climbed to a higher position than the previous one, settling on the 4th spot of South Korea Gaon Albums Chart. The single “Twinkle Twinkle" became the South Korean hit of the year. It was included in the digital album, Girl's Day Party #3. The same year, the band gave its first abroad concert in Taiwan. It was arranged by Korea Tourism Organization. Other popular South Korean groups were also invited.

Later in 2011, the label funded a 26-episode documentary about the group called Kira Kira Slim. The promotional series aired on Mnet Japan.

In April 2012, the group released its third EP, Everyday II. The album reached the 11th spot of the national chart. The same year, the artists recorded such hits as "Oh! My God", "Blue Rain 2012", and "Don't Forget Me", which climbed to high spots on the charts.

In March 2013, the musicians released their first LP, Expectation. The album was re-released later as Female President. The second version featured a promotional single “Female President”. The first version reached the 4th spot on South Korea Gaon Albums Chart. The second one came in 6th. Songs "Expect", "White Day", "Don't Forget Me", and "Hug Me Once turned into hits.

Singles "Something", "Darling", and I Miss You" became hits in 2014. On South Korean Gaon Digital Chart, they reached 2nd, 1st, and 4th positions accordingly. The first two singles also made it into Billboard’s World Digital Songs Chart, settling on 9th and 5th spots accordingly.

The same year, Girl’s Day arranged a concert in South Korea, which they called Summer Party. Soon, in Japan, they organized another one under the name of Winter Party. The artists also appeared on TV shows Human Documentary on MBC and Picnic Live on MBC Music.

In 2015, the girls recorded one more EP, which they called Love. It came in third on South Korea Gaon Albums Chart. The album featured such successful songs as "With Me", "Come Slowly", "Ring My Bell", "Whistle", and "Top Girl".

The same year, Girl’s Day recorded an album for its Japanese fans. However, Girl’s Day 2015 Autumn Party, (created after the concert Autumn Party) didn’t turn out to be commercially successful, selling less than 2,000 copies. The artists also performed in the TV show One Fine Day on MBC Music.

In 2017, the band presented one more EP, Girl's Day Everyday #5. It came in 5th on the national chart and settled on the 7th spot of Billboard’s World Albums Chart. The single “I’ll be Yours” climbed to the 3rd spot of the South Korean chart and sold more than 400,000 copies.