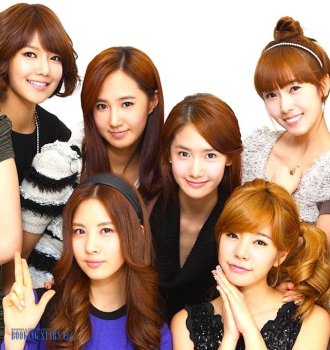 Girls' Generation was formed in 2007 in Seoul. The lineup includes Sooyoung, Taeyeon, Tiffany, Sunny, Yuri, Hyoyeon, Yoona, and Seohyun. Initially, the band had nine members, but the vocalist Jessica left in September 2014.

Even though the band’s official name is Girls’ Generation, it also performs under such names as So-nyuh Shi-dae, SoShi, and SNSD.

The idea to create a band belonged to SM Entertainment. The company arranged training camps for young talents. One of such talents was Jessica, who worked with the label since 2000. The rest of the group members auditioned between 2001 and 2003.

In 2007, the group debuted during a reality show School of Rock, which aired on Mnet. The girls performed their first song “Into The New World”. They also took part in SBS’s Inkigayo. The song was a cover version of an old hit “Kissing You”, recorded in 1989 by Lee Seung-cheol.

In November 2007, the girls released their debut album, Girls' Generation. It climbed to the 2nd and 12th spot of the monthly and yearly South Korea Gaon Albums Chart. The LP featured such songs as "Girls' Generation", "Ooh La-La!", "Baby Baby", and "Complete". The album sold 206,000 copies. In March 2008, it was re-released under the title Baby Baby for the Japanese audience.

In 2009, the artists recorded two EPs, Gee and Tell Me Your Wish. The albums didn’t make it into the South Korean charts. However, the fans gave them high scores. The most popular songs were "Gee", "Way to Go!", "Destiny", "Let's Talk About Love", "Tell Me Your Wish (Genie)", "Girlfriend", "My Child", and "One Year Later". At that time, many organizers tried to book Girls’ Generation for private events.

In 2010, the group presented its second LP, Oh!. The album topped South Korea Gaon Albums Chart, came in second on Taiwan G-Music Albums Chart and settled on the 54th spot of Japanese Oricon Album Chart. The same year, the artists presented a new EP, Hoot. It conquered the national charts.

The third LP came out in 2011. The artists called it The Boys. The album topped South Korea Gaon Albums Chart and came in second on US World Albums Chart and Japanese Oricon Album Chart. A while later, the group re-released the album under the name of Girls' Generation for the Japanese audience. The LP topped the Japanese charts. In 2012 and 2013, the group recorded two successful albums for its Japanese fans. The got the names Girls & Peace and Love & Peace

At the beginning of 2013, Girls’ Generation presented a new LP, I Got a Boy. Songs "I Got a Boy", "Dancing Queen", "Promise", "Lost In Love (유리아이)", and "Look at Me" became hits. The single “I Got A Boy” sold more than a million copies in South Korea.

In 2014, the girls presented a new EP, Mr.Mr. It topped South Korea Gaon Albums Chart and came in third on US World Albums Chart. The single “Mr.Mr.” became a huge hit, selling more than 900,000 copies.

In 2015, the group recorded another LP, Lion Heart, for the South Korean audience. It topped South Korea Gaon Albums Chart and US World Albums Chart. Singles “Lion Heart” and “Party” climbed to high spots on the charts and sold about a million copies each.

In 2017, the band presented Holiday Night. It climbed to the second spot of the South Korean Chart and topped the World Albums Chart. Single “All Night” and “Holidays” were extremely popular.

In order to promote their albums, the singers constantly tour South Korea and Japan. They arrange numerous concerts in each country. The tickets to their performances are often sold out.

The group is recording new hits and performing live.