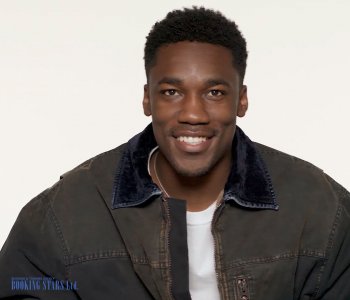 Giveon - Grammy-nominated R&B baritone who made his major-label debut for Epic in 2019.

An elegant baritone vocalist with a thoughtful approach to songwriting, Grammy-nominated R&B artist Giveon made his major-label debut in 2019 with "Like I Want You." The bluesy, retro-contemporary ballad registered on multiple Billboard R&B charts and paved the way for a fruitful and busy 2020.

Giveon's year was highlighted by the short form releases Take Time and When It's All Said and Done, and a featured appearance on Drake's Top 20 pop hit "Chicago Freestyle."

Dark Lane Demo TapesLong Beach native Giveon Evans got into music as a youngster and first sang publicly in school. Participating in the Recording Academy's Grammy U program at the age of 18, he had a breakthrough when he was encouraged to perform "Fly Me to the Moon" in the style of Frank Sinatra. This prompted him to fully utilize and hone his baritone range. In 2018, he released a pair of introspective ballads, "Garden Kisses" and "Fields," as his first commercial recordings. He then landed a deal with Epic, and in 2019 issued "Like I Want You," a single produced by Sevn Thomas, Jahaan Sweet, and River Tiber. Its release coincided with performances that fall as an opening act on a North America tour headlined by Snoh Aalegra. In March 2020, Giveon released his debut EP, Take Time, by which point "Like I Want You" had reached Billboard's R&B Songs and Adult R&B Songs charts, peaking respectively at numbers 12 and 20. A couple months later, he entered Drake's network by appearing on Dark Lane Demo Tapes as the featured vocalist on "Chicago Freestyle," which he also co-wrote. The track reached number 14 on the Billboard Hot 100. That October, Giveon issued a briefer second EP, When It's All Said and Done. Three of its four songs, including the Aalegra collaboration "Last Time," also charted. Shortly thereafter, Take Time was nominated for a Grammy in the category of Best R&B Album.

How much does it cost to book Giveon:
Price inquiry
Giveon booking agent:
Contact agent
Giveon Contacts:
Send Giveon a message
« previous next »