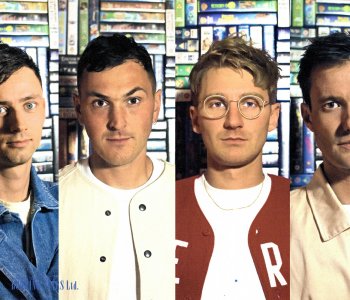 The skilled genre-mashers in Oxford, England's Glass Animals bring synth pop, indie, R&B, and hip-hop together in innovative and inviting ways. On 2014's ZABA, Dave Bayley's androgynous falsetto and surreal lyrics fit perfectly with the album's hypnotic beats, rippling guitars, and aquatic synths, resulting in slightly alien yet alluring tracks like the certified platinum single "Gooey." Glass Animals expanded their perspective on 2016's Mercury Prize-nominated How to Be a Human Being, a set of artful character sketches that revealed new dimensions to their music as well as Bayley's songwriting. He took a more personal approach on 2020's abstractly autobiographical Dreamland, mixing the sounds and pop culture from his '90s childhood into futuristic-sounding songs.

Glass AnimalsThe son of a Welsh father and Israeli mother, singer/songwriter/guitarist Bayley spent his childhood in Massachusetts and his adolescence in Texas, immersing himself in American pop culture and the music of Missy Elliott, Busta Rhymes, Eminem, and the Neptunes. When he was 14, Bayley and his family settled in Oxford, England. It was there that he met his friends and future bandmates Joe Seaward (drums), Drew MacFarlane (guitars/keyboards), and Edmund Irwin-Singer (bass/keyboards). As a medical school student at King's College, Bayley's insomnia led him to write songs on his computer that he shared with his friends, and it wasn't long until they started playing them together. Choosing their name from random words in the dictionary, they became Glass Animals in 2010.

LeaflingsWhile they were still at university, Glass Animals issued their 2012 debut EP, Leaflings, on Kaya Kaya Records. One of the band's shows caught the attention of acclaimed producer Paul Epworth, who signed them to his label Wolf Tone. The Black Mambo/Exxus EP appeared in Europe in 2013, and the Glass Animals EP -- which featured "Woozy," a collaboration with rapper/singer/songwriter Jean Deaux -- was released that year in the U.S. To make their debut album, Glass Animals traded their Oxfordshire home studio for one in London and refined their percolating mix of indie pop, electronic, hip-hop, and R&B. Co-produced by Bayley and Epworth and inspired in part by William Steig's book The Zabajaba Jungle, ZABA arrived in June 2014. The album reached number 12 on Australia's ARIA chart and eventually topped Billboard's Alternative New Artist Chart in the U.S. a year after it was released. Similarly, the single "Gooey" was eventually certified platinum in the States. ZABA's critical acclaim and growing word-of-mouth popularity led the band to collaborate with Joey Bada$$ on the October 2015 single "Lose Control."

While on their lengthy world tour in support of ZABA, Glass Animals gathered stories from the people they encountered. They used these tales as lyrical inspiration for their second long-player, which they recorded in late 2015. How to Be a Human Being, a concept album with each song telling the story of a different character, appeared in August 2016. It fared well critically and on the charts, becoming a Top 20 hit in Australia, New Zealand, and the U.S., and hitting number 23 on the U.K. Albums Chart. In addition to snagging a 2017 Mercury Prize nomination, How to Be a Human Being won the 2018 Music Producers Guild Awards for U.K. Album of the Year and Self Producing Artist of the Year.

Glass Animals' momentum came to a halt in July 2018, when Seaward broke his leg and fractured his skull after being hit by a truck while riding his bike in Dublin. As he spent months learning to talk, walk, read, and play drums again, Bayley worked with artists outside of the band, producing and writing songs for Flume, 6LACK, and Khalid. Glass Animals started their return in November 2019 with the release of the Denzel Curry collaboration "Tokyo Drifting" and an Oxford show at the end of the year that saw Seaward play in front of a crowd for the first time since his accident. Informed by the hardships and healing the band experienced, August 2020's Dreamland introduced more autobiographical songwriting to Glass Animals' lively sound.