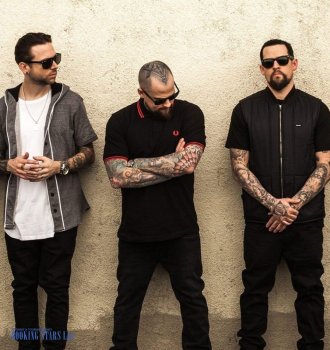 Good Charlotte was formed in 1995 in the USA. Its initial lineup included a vocalist and a keyboardist Joel Madden, a guitarist and a vocalist Benji Madden, a bass player Paul Thomas, and a drummer Aaron Escolopio. Aaron left the band in 2001. The rest of the artists still perform today.

All group members attended La Plata High School in Maryland. The group acquired its first stage experience at local rock festivals in 1998 and 1999. At about the same time, they found a new group member, a keyboardist Billy Martin. Martin is still working with the group.

In 2000, the group signed a contract with Epic Records and released its debut LP, Good Charlotte. The album climbed to the 185th spot of Billboard 200. It became popular in New Zealand and the UK. The LP sold 500,000 copies in the USA. The group recorded a music video to their single “Little Thing”. Today, their debut video has almost 10 million views on YouTube.

The group’s second LP was more successful. They called it The Young and the Hopeless. After the release in 2000, the LP climbed to the 7th spot of Billboard 200 and settled on the 15th position of the UK Albums Chart. It appeared on other European charts as well. The LP featured such big hits as "The Anthem", "Lifestyles of the Rich & Famous", "Girls & Boys", "Hold On", and "The Young & the Hopeless". The first one earned a gold status in the USA. The LP itself acquired three platinum certifications from RIAA. At that time, many fans tried to book Good Charlotte for their private events.

In 2007, Good Charlotte presented another LP, Good Morning Revival. It did great in the USA, reaching the 7th position on Billboard 200 and became very popular abroad, appearing on many charts. The single "Dance Floor Anthem (I Don't Want to Be in Love)" became a platinum hit and conquered the charts in the USA and Europe.

The next LP, Cardiology, was slightly less popular than its predecessors. It reached the 31st position of Billboard 200 and settled on the 7th spot of Rock Albums Chart. The album featured hit singles, "Like It's Her Birthday", "Last Night", and "Sex on the Radio". All of them became platinum.

The group went on a hiatus in 2011. The artists stopped performing together and recording new songs. The hiatus ended in 2015.

In 2016, Good Charlotte released a new LP, Youth Authority. It appeared on the 23rd spot of Billboard 200. The album seemed to be less commercially successful than the LPs released before the hiatus, but it didn’t stop the musicians from recording new hits.

In September 2018, the group presented another LP, Generation Rx. Today, it sits on the 164th spot of Billboard 200. The album features such hits as "Actual Pain","Shadowboxer", "Prayers", and "Self Help". The music videos for these songs are earning popularity on YouTube.