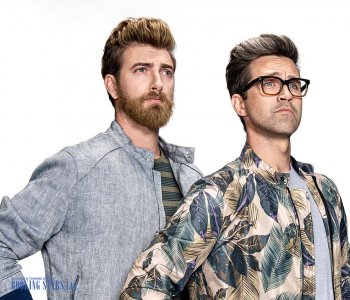 Good Mythical Morning (or simply GMM), is an American daytime comedy/variety/talk show hosted by Rhett James McLaughlin (born: October 11, 1977 [age 43]), & Charles Lincoln "Link" Neal III (born: June 1, 1978 [age 42]). Boasting over 1,000 episodes, its main focus is on the somewhat peculiar lives of the hosts, as well as episodes that talk about the making of their main channel videos. The show first aired on YouTube on January 9, 2012, and continues to be uploaded every weekday. As of January 2021, the show has nineteen seasons.

Good Mythical Morning is uploaded to YouTube every weekday morning. Each episode usually consisted of Rhett and Link doing antics, often proposing and answering sometimes absurd questions, telling stories, singing songs, doing challenges, and so on. Usually, there is no consistent theme or schedule for the episodes, with the exception of Thursdays and Fridays (and for a season, Wednesdays), which, depending on the season, are themed around social media.

At the end of every episode, Rhett and Link spin the "Wheel of Mythicality," which can land on categories such as "6 Degrees of Bacon," "Win face," and "Gifticality." This often changes between seasons.
The third season of Good Mythical Morning introduced the "Taste Test" series, which include episodes where the hosts guess the food in blindfolds, challenge themselves to eat something often spicy and disgusting, and compare a particular type of food across different brands. Some of the most popular videos from this series are the "Bug War Challenge," the "Ghost Pepper Challenge," the "Carolina Reaper Challenge," and the "Sriracha Challenge."

The fifth season brought the "Will It" series, in which the hosts try and invent different varieties of a popular type of food with unusual and increasingly disgusting ingredients. The first episode of "Will It" was aired on May 5, 2014, on Cinco De Mayo titled "Will it Taco" where Rhett and Link tried tacos made of pine needles, baby shampoo, and congealed pork blood. The Will It series continues to be the most popular series on the channel so far, along with Taste Test.

While the fan response to the series has been mostly positive, the relaunched format starting November 6, 2017, was met with an adverse reaction from many fans. Several viewers criticized the new format, commenting that the show had lost its charm, its sudden focus on guest stars and that the new episodes felt forced and rushed. Many fans also reacted negatively to the decision to split each episode into four parts as a way to increase ad revenue. While the show addressed these complaints in a video response, the number of views for newer episodes steadily declined in the following weeks, with only a handful of episodes surpassing one million views. However, as of 2018, the show has retained over thirteen million subscribers to their YouTube channel.

Despite the criticisms, the show kept the new format into Season 13. Still, the videos had been reduced to three, and a "traffic light" system had been placed around the thumbnails to guide the viewers to watch the show in chronological order (green being the first video, yellow for the second, and red for the third).

The show reverted to the traditional format (1 GMM video + GMMore) upon the beginning of Season 14. No other changes to the format have been made since.

On December 13, 2013, Rhett & Link made a new YouTube channel called Good Mythical MORE. The videos are extensions of Good Mythical Morning episodes. They are often in a more laid-back non-edited fashion, often just talking about the primary episode, their lives, or just chilling out with the staff (known as the "Mythical Crew"). The format, however, has changed in the recent seasons, now edited, and as a regular extension to GMM. They now reveal the "Wheel Of Mythicality" ending at the start of each GMMore episode.

It is a cooking channel primarily hosted by one of the Mythical Crew members and the “Mythical Chef,” Josh Scherer, which focuses everything related to food. It features recipe videos that are uploaded every week as well as various food shows like “Fancy Fast Food”. The new channel launched on January 13, 2020, along with the 17th season of Good Mythical Morning.

It was initially a channel that was dedicated entirely to the Mythical Crew and was named as This Is Mythical and later as simply Mythical. Before this, it was also a secret behind-the-scenes channel for Rhett and Link.

On September 27, 2013, Rhett and Link launched Ear Biscuits on iTunes, Spotify and SoundCloud. The podcast debuted in the US on the iTunes charts at No. 22. and it is described as intimate discussions with each other such as how they became blood brothers, their close encounters with death, and more. They have interviewed other notable Internet personalities including Grace Helbig, Julian Smith, Philip DeFranco, PewDiePie, and Rainn Wilson. The show has had live recordings on VidCon as well as Rhett-and-Link-only episodes each month.

The show won a Shorty Award for Best Podcast in April 2016.

On March 27, 2017, the podcast returned from a hiatus with a new video format on their latest channel, This Is Mythical, and has moved to the Good Mythical Morning channel. The podcast continues to be released on iTunes and Soundcloud, as well as Spotify.

On January 7, 2019, the podcast was moved from the Good Mythical Morning channel to its own separate channel.

On June 29, 2012, Rhett and Link would soon be completing Season One of Good Mythical Morning after a whopping one hundred twenty-nine episodes. Following the clip-show style episodebest of GMM Season One, the season ended.

Replacing it for a month, however, would be another show entitled RLVault.

In addition to the new theme and opening, the format was given minor tweaks for Season Two, such as a makeover for the Wheel of Mythicality, the wheel that tells Rhett and Link how to end the show. The Wheel now bears three colored show endings, one blue, one red, and one black. Rhett and Link don't know about these three endings beforehand, leading to some level of mystery about what will happen. The blue and red colors represent positive endings, while black represents something negative.

Season Two also featured many new segments. Thursdays became the day for reading mail and social media posts; most of the former would eventually end up in their Mythical Time Capsule. Also scheduled for Thursday was a two to three-minute puppet show starring high-quality, fan-built puppet incarnations of the two, known as the "Time Rangerers." A week of episodes also occurred in which Link was absent due to a family gathering, and to compensate, Rhett brought on guest hosts, namely SourceFed's Joe Bereta, Rhett's children, and the infamous taxidermist Chuck Testa.

The season ended on November 30, 2012, with a compilation episode of the season's greatest moments.

The format for the episodes stayed almost the same, with a few minor tweaks. Two new spots were added to the Wheel of Mythicality, "Link's Choice," and the black and blue spots remained with the same function as before they were kids.

Also, mid-season, Rhett and Link moved to a new set that functioned as the duo's headquarters and the workplace of new interns who occasionally make cameos in the filming of the show. Season three also became the premiere season for the rock to which Rhett would glue small items sent to their P.O. Box, and would continually grow based on the number of items.

Thursdays on the show also became dedicated to mail, bringing back former rhettandlink2 segment "Friday Means Mail," of course, with the day changed, and posts from Facebook, Twitter, etc. in a way similar to Season Two's Mythical Perspective day.

The show, unfortunately, ended the season after twelve weeks, on April 5, 2013, following the announcement of an upcoming project, The Mythical Show, which would also be released on their second channel. Despite the project filling the time slot, Rhett and Link announced the twelve-minute talk show. Furthermore, the final episode became the first finale not to be a clip show-style episode. It featured an episode called "Good Mythical Morning Trivia Game," in which Rhett and Link both answered trivia questions. See full page: Mythical Christmas Special