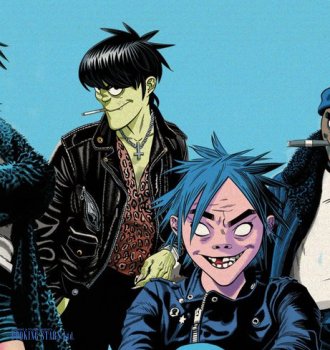 In 1998, musicians Damon Albarn and Jamie Hewlett, who were roommates in a small London apartment, came up with an unusual project. They decided to form a virtual music group.

The band’s lineup featured four virtual members, 2-D (vocalist, keyboardist), Murdoc Niccals (bassist, drummer), Noodle (female guitar player), and Russel Hobbs (drummer, percussionist). Sometimes, the artists are joined by a virtual rapper Del Tha, who has the voice of the rapper Del Funky Homosapien. Every once in a while, other characters join the band as well.

In March 2001, the group released its first LP, Gorillaz, which earned positive reviews from the critics. It came in third on the UK Albums Chart and climbed to the 14th spot of Billboard 200. The same month, the artists presented a single “Clint Eastwood”, which settled on the 4th position of the UK Singles Chart and came in third on US Billboard Modern Rock Tracks Chart.

In May 2005, the group presented the 2nd LP, Demon Days. It climbed to high spots on the charts all over Europe and came in 6th on Billboard 200. The album earned a huge variety of platinum certifications, including six in the group’s native UK. More than 8 million copies were sold worldwide. Almost 2 million of them went to the American fans.

The popularity of the group was on the rise. It released three tracks from the second LP as singles. One of them was “Feel Good Inc.”, recorded with De La Soul, topped US Billboard Modern Rock Chart and came in 2nd on the UK Singles Chart. In August, the group presented “Dare”, in which Noodle was voiced by Rosie Wilson. The single reached high spots on the charts. In November, another single “Dirty Harry”, recorded with Bootie Brown, reached the 6th spot on the UK Singles Chart.

In 2007, Albarn and Hewlett started working on another project Carousel, which eventually came out as a new album called Plastic Beach. It sold over 74,000 copies in the first week in the UK and about 112,000 in the USA. It reached the 2nd spot on the official British chart and Billboard 200. The album went platinum.

In October 2010, the band went to tour the world to support the third album. The lead vocalist for the concert tour was Damon Albarn. The fans finally saw their favorite cartoon characters live. The musicians played in front of a big screen, which featured a video of their characters. After seeing the group live, many fans wanted to book Gorillaz for private events.

During the tour, the musicians worked on the next LP, which came out in 2011 under the name, The Fall. Critics gave the album mixed reviews. Some noted that the previous albums were much better. The same became obvious when the ratings came out. The album reached the 12th spot of the UK Albums Chart and the 24th position of Billboard 200.

In 2012, Albarn and Hewlett started having disagreements. Hewlett believed that the band is focusing too much on the music rather than on the characters. The group stopped presenting new songs.

In September 2015, the musicians solved their problems and started working on the new album. The next LP came out in September 2017. The duo called it Humanz. It came in second on the UK Albums Chart and Billboard 200.

In June 2018, Gorillaz presented its sixth LP, The Now Now. It reached high spots on both British and American charts. As of now, about 350,000 copies have been sold worldwide. 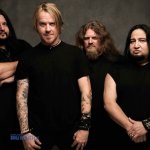