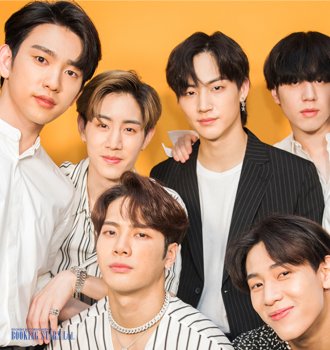 Got7 consists of seven members, JB, Jinyoung, Jackson, Youngjae, BamBam, Mark, and Yugyeom. JYP Entertainment has been trying to find the right artists for the boy band since 2009. At first, only JB and Jinyoung passed the audition. Mark and BamBam worked with the label on other projects in 2010 in Los Angeles. Yugyeom and Jackson were discovered through talent contests. Initially, the group was a quartet. The lineup included Mark, Jackson, BamBam, and Yugyeom. They debuted in 2013 on a TV show Who is Next: WIN.

The lineup was finalized in January 2014. The artists immediately conquered the hearts of South Korean fans. They didn’t just perform popular music, but also added martial arts elements to their performances. A few days after the final lineup was confirmed, the team released a debut EP, Got It?, The album featured just 6 tracks, the most popular one of which was “Girls Girls Girls". It climbed to the 21st spot of the South Korean Gaon Chart. The EP topped Billboard World Albums Chart and came in second on South Korea Gaon Weekly Albums Chart. The band became famous in many countries.

In June 2014, the group released its second EP, Got Love, and the first LP, Identify, recorded for the South Korean audience. The LP featured such successful songs as, "She's A Monster", "A", and "Gimme". It climbed to the 6th spot of Billboard World Albums Chart and topped South Korean Gaon Weekly Album Chart. After the release of this album, the artists multiplied their popularity. It became almost impossible to book Got7 for any private events.

In 2015, the band released two EPs, Just Right and Mad. They climbed to the third and first place of the South Korean Gaon Album Chart accordingly.

In March 2016, Got7 recorded a new EP, Flight Log: Departure. The album was presented to the South Korean fans. In November, the artists created the Japanese version of the same album, which came out under the name, Hey Yah. The year was busy for the musicians. They released two more albums, Flight Log: Turbulence and Moriagatteyo. The first one won prizes at Golden Disc Awards and Seoul Music Awards. The second one featured such hits as "Around the World", "Love Train", and "Laugh Laugh Laugh".

In 2017, the artists recorded two more EPs, Flight Log: Arrival and 7 for 7. These two albums, which featured eight and seven tracks accordingly, topped the South Korean charts. They also became popular in Japan, Australia, New Zealand, Belgium, and the USA. The same year, the band released another EP, Turn Up, created for the Japanese audience. It reached the 3rd spot on the Japanese national chart.

In March 2018, Got7 presented their next EP, Eyes on You, which included the following tracks: "One and Only You", "Hesitate", "Look", "Thank You", "Us", and "The Reason". A month later, the musicians recorded their first live album, GOT7 Arena Special 2017 "My Swagger". Throughout the group’s career, the musicians often gave live performances.

In September 2018, the new LP came out. Got7 named it Present: You. Only two months after the official release, the album sold 250,000 copies. The album featured South Korean, Japanese, and English songs. One of the hits, “Lullaby” was aired on M Countdown (Mnet), Music Bank (KBS), Show! Music Core (MBC), and Inkigayo (SBS) in September and on M Countdown (Mnet), Show Champion (MBC Music), and Music Bank (KBS) in October. The album topped Gaon Charts, came in 3rd on Billboard’s World Album’s Chart, and reached the 12th spot of Japanese Albums Chart.

In December 2018, the group’s fans are waiting for another LP, called Present: You &Me. The album will be recorded for the South Korean audience.

In 2018, the artists won a prize at Asia Artist Awards as Artist Of The Year. The also won Hot Performance of the Year and World Hallyu Star at Gaon Chart Music Awards.

Got7 continues working on new songs and performing live.

Cost to book Got7:
Price inquiry
Got7 booking agent:
Contact agent
Contacts:
Send Got7 a message
« previous next »