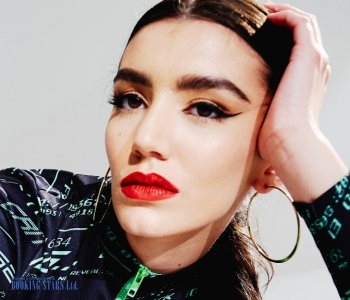 Gracey - Sussex-bred singer/songwriter with a moody sound steeped in electronic pop and R&B.

Britain's Gracey is a dusky-voiced singer and songwriter with a moody sound steeped in synthy electronic pop and R&B traditions. She broke through in 2020 collaborating with 220 Kid on the song "Don't Need Love."

Born Grace Barker in 1998, Gracey grew up Haywards Heath, West Sussex, where she took vocal lessons and participated in musical theater. Around age 14, she began attending The Brit School, a prestigious performing arts academy in nearby Croydon. Initially influenced by singers like Gwen Stefani and Katy Perry, she started recording her own songs and posting them online. She eventually caught the ear of the Kent-based pop production house Xenomania who brought her on board as a songwriter. While working with Xenomania, Gracey gained attention as a writer, penning tracks for Jonas Blue, MJ Cole, Sub Focus, Olly Murs, and others. As her work matured, she began writing more songs for herself, drawing inspiration from artists like Sia, Julia Michaels, Imogen Heap, and Francis and the Lights. In 2019, she released her debut single, "Different Things," a yearning electronic ballad produced with her longtime collaborator Alan Sampson. More buzzed-about tracks followed, including 2019's "Don't Need Love" with 220 Kid, which peaked at number nine on the U.K. charts. Around the same time, Gracey was diagnosed with vocal nodules and underwent surgery to correct the issue. After recovering, she returned with more tracks, including 2020's "Empty Love" with Ruel and "Alone in My Room (Gone)."

How much does it cost to book Gracey:
Price inquiry
Gracey booking agent:
Contact agent
Gracey Contacts:
Send Gracey a message
« previous next »