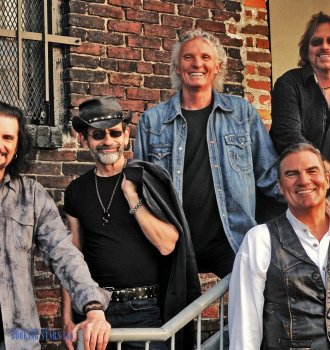 The rock band Grand Funk Railroad was formed in Michigan, in 1969. The band went through several lineup changes and took a few breaks. However, it’s still going strong in the 21st century. The current lineup includes Don Brewer, Mel Schacher, Max Carl, Tim Cashion, and Bruce Kulick. The band is mostly famous for such hits as “The Loco-Motion”, “We’re an American Band”, and “Some Kind of Wonderful”.

Grand Funk Railroad was one of the first American hard rock bands, which became famous among fans while being massively unaccepted by the critics. The band signed a contract with Capitol Records and immediately started gaining fame by performing at big music festivals. Their first singles got into the charts, reaching impressive spots.

In 1969, the band released their first album On Time. It reached the 27th spot on Billboard 200 and earned a golden certification in the USA.

In 1970, Grand Funk recorded their second album Grand Funk Railroad, which was even more successful than their previous LP and reached the 11th spot on Billboard 200 and 9th spot on Canadian Albums Chart. The LP was certified platinum in the USA.

By the summer of 1970, the band became a big hit. For the next four years, all of their albums got into the top ten of Billboard 200. Their most successful LP was called We’re an American Band (1973). It reached the second spot on Billboard 200 and the 4th spot on Canadian Albums Chart.

Many people believe that the huge success of the band in the 1970’s was due to their manager’s Terry Knight’s promotional work. Some say that Terry Knight paid a huge amount of money to promote the LP Closer to Home on one of the advertising boards at Time Square.

In the beginning of 1971, Grand Funk Railroad became the second band after Beatles to sell out the tickets to the concert at Shea Stadium in New York.

In 1973, the group shortened their name to Grand Funk but in 1975, when the band’s popularity started to wane, they brought the old name back.

In 1976, the band went on a hiatus and came back in 1981. They released two LPs, which were failures and went on a break again.

In 1997, the band got back together and released a live album Bosnia, followed by Live: The 1971 Tour in 2002. The band continues to perform live.