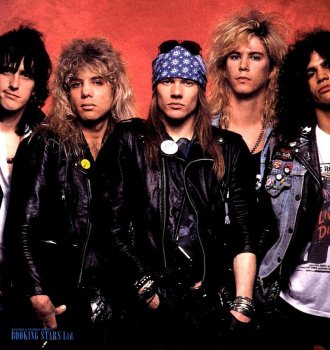 Guns N’ Roses began its journey in Los Angeles in 1985. The initial lineup included Axel Rose (vocals), Tracii Guns (guitar), Izzy Stradlin (guitar), Ole Beich (bass), and Rob Gardner (drums). The name of the band was a combination of two group names (Hollywood Rose and L.A. Guns), in which Izzy and Tracii performed in the past.

In 1986, Guns N’ Roses signed a contract with a recording studio Geffen Records. A year later, they presented the first album, Appetite for Destruction, which together with the single "Sweet Child o’ Mine" reached the top spots of American charts. The album was very popular in the USA and sold over 30 million copies all over the world. It’s still considered to be the most sold debut album in the USA. After the release, the band went on a world tour. For 16 months, the musicians toured North America and Europe. During the tour, Steven Adler (drummer) hurt his hand and was replaced by Don Henley from Eagles.

In 1988, the group released its second LP, Use Your Illusion, which was later re-released in 1991. It was a two-part album, which beat the record of the previous LP and sold 35 million copies. Guns N’ Roses were actively touring the world. They gave concerts in the USA, Canada, Japan, and Australia. Many event organizers dreamed of booking Guns N’ Roses, but it was nearly impossible.

The famous group performed together with Aerosmith and Iron Maiden. At about the same time, The Rolling Stone magazine decided to write about Guns N' Roses instead of Aerosmith. The musicians appeared on the cover of a prestigious magazine and became even more popular.

The group was famous for its scandalous reputation. It started with album cover designs, which weren’t approved by the religious society. Then Axel Rose’s words led to accusations of him being racist and homophobic. The group’s leader never tried to hide his negative views of homosexuals. Fans had frequent fights during the group’s concerts. Once Axel hit a security guard. At one point the band members declared that they use drugs. All of the above lead to Guns N’ Roses being called the most dangerous group in the world.

In 1987, the band released their first music video "Welcome to the Jungle". It appeared on MTV and quickly became popular. The single was used in different movies. In one of them, the band members had small roles. Many music videos were filmed for the songs from Use Your Illusion. Among them were "Estranged", "Don’t Cry", and "November Rain". They are named the most expensive videos in music history. The 28-months tour in support of the first albums, which included 92 concerts in 27 countries, set a record.

In 1990, Steven Adler left the group due to drug problems. After making several attempts of finding a drummer, the band settled for Fred Coury from Cinderella. At about the same time, Guns N’ Roses welcomed Dizzy Reed.

At the end of 1993, Guns N' Roses released a compilation of the cover versions, The Spaghetti Incident? It reached high spots on the charts. Between 1994 and 1999, the group had an unstable time. They kept having disagreements, which led to many lineup changes. The crisis began after the release of "Sympathy for the Devil" and ended in 2008 when the band recorded a new LP, Chinese Democracy, which sold over 2.5 million copies worldwide.

In 2018, the band is actively touring the world and planning to perform at Download Festival in the UK.