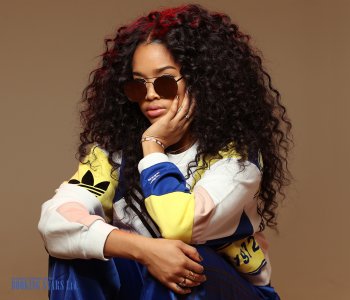 H.E.R. - Singer/songwriter whose predominantly downcast approach to R&B, exemplified by a self-titled LP, was recognized with five Grammy nominations in 2018.

Presented anonymously, contemporary R&B artist H.E.R. (Having Everything Revealed) surfaced in 2016 with H.E.R., Vol. 1, an EP of downcast post-breakup material that sounded both vulnerable and assured, much like what followed from the singer and songwriter. The seven-track EP appeared on major-label RCA in September 2016 with limited promotion, but labelmates Alicia Keys and Bryson Tiller spread the word through social media, and a cover of Drake's "Jungle" helped send the set to number 28 on Billboard's R&B/hip-hop chart. A similarly styled follow-up, H.E.R., Vol. 2, arrived in June of 2017 and debuted at number 22. The EPs were soon combined and expanded, released as H.E.R., with six additional cuts -- including "Best Part," a number 32 R&B/hip-hop hit previously heard on Daniel Caesar's Freudian -- referred to as B-sides.

In 2018, H.E.R. and Khalid teamed up for the Superfly soundtrack cut "This Way," and that August a third EP was released, I Used to Know Her: The Prelude, which went straight to the top of the R&B/hip-hop chart thanks to "Could've Been," a duet with Bryson Tiller. By the end of the year, she was nominated for five Grammy Awards: Album of the Year and Best R&B Album (for H.E.R.), Best R&B Performance (for "Best Part"), Best R&B Song (for "Focus"), and Best New Artist. At the 2019 ceremony, she took home the prizes for Best R&B Album and Performance. Later that year, she joined a diverse range of collaborators such as Chris Brown ("Come Together"), Jess Glynne ("Thursday"), Ed Sheeran ("I Don't Want Your Money"), and YBN Cordae ("Racks"), while also issuing the single "21." H.E.R. earned another five Grammy nominations in late 2019: Album of the Year (for I Used to Know Her), Record of the Year and Song of the Year (for "Hard Place"), and Best R&B Song and Best R&B Performance (for "Could've Been"). She landed another charting hit in 2020 with "Damage," and followed it up in early 2021 with "Fight for You" from the Judas and the Black Messiah soundtrack.