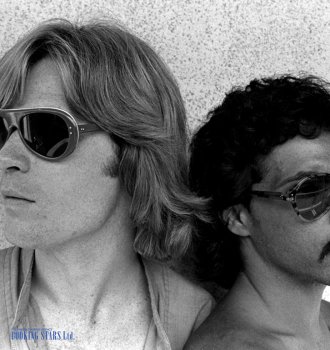 A rock duo Hall &Oates was formed in Philadelphia in 1970. It consists of Daryl Hall and John Oates. They are mostly famous for such songs as “Sara Smile”, “Rich Girl”, and “I Can’t Go for That (No Can’t Do)”.

Daryl Hall and John Oates met in 1967 at Temple University, which they both attended. At that moment, each one of them was a band leader. The young men decided to form a separate project just for the two of them.

In 1972, the duo signed a contract with Atlantic Records. Their first work was far from being successful, even though they collaborated with such famous producers as Arif Mardin and Todd Rundgren. John and Daryl had trouble with defining their own music style, coming up with something between rhythm and blues, soul, folk, and pop.

They finally became successful after signing a deal with RCA Records. In 1975, they released the LP Daryl Hall & Joh Oats, which reached the 17th spot on Billboard 200. The album included the hit single “Sara Smile”, which allowed the band to get into the top -10 of Billboard Hot 100.

In 1977, the duo finally managed to top the charts with their single “Rich Girl” from the album Bigger Than Both of Us (1976). After that, the success started to wane. Daryl and John couldn’t keep up with the ever-changing music climate.

During the peak of disco era, the duo released a rock album Bigger than Both of Us (1976). When they finally came up with a dance LP X-Static (1979), the disco popularity was waning.

In 1977, RCA offered Daryl to record a solo album, but it was so experimental that eventually, the label refused to release it.

In 1980, Hall &Oats made a decision to personally produce their next album Voices. They did a great job and reached the 17th spot on Billboard 200. The single from that album “Kiss on My List” topped the Billboard Hot 100 for three weeks. Their next three albums Private Eyes, H20, and Big Bam Boom were big hits receiving multiple platinum certifications and getting into the top 10 of Billboard 200.