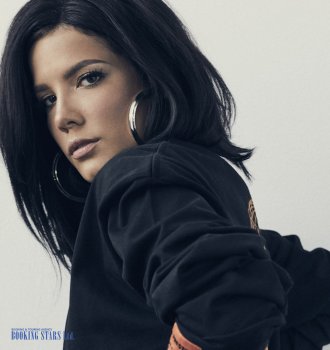 Ashley Nicolette Frangipane was born on 29 September 1994 in Edison, NJ. Her father has African American roots and her mom is of Italian and Hungarian ancestry. Ashley loved music since childhood. She learned how to play the violin, cello, and viola. Later she also mastered guitar. When Frangipane was 17, she started writing poems. At 18, the aspiring singer chose a pseudonym Halsey, which is an anagram for her name Ashley. She started giving acoustic concerts in several New Jersey cities.

In 2012, Ashley finished high school. Due to financial troubles, she didn’t own a home and couldn’t apply to Rhode Island School of Design, where she wanted to study. Halsey decided to pursue a singing career. At first, she was recording cover versions of the popular songs and posting them on her YouTube channel and Tumblr. The channel was gradually becoming more and more popular.

In 2013, Halsey moved to her grandmother and began writing songs using the poems she came up with earlier. At one of the parties, the young singer met a producer, who offered her to record a song for an advertising campaign. She used her time in the studio to record another song "Ghost" and uploaded it to SoundCloud. The song became popular and caught the attention of several labels. Halsey was offered a few contracts and eventually signed her first one with Astralwerks.

In October 2014, Halsey released her first EP Room 93, which included five songs. Two lead songs "Hurricane" and "Ghost" came out as singles. Each one was followed by a music video, which was filmed in a motel room 93.

In 2015, Halsey released her first studio album Badlands. She wrote all the lyrics for the songs. When describing the LP, the young woman called it a conceptual album about an antiutopian society. The lead single "New Americana" came out in September and reached the 25th spot on Billboard Mainstream 40. Later it earned a variety of platinum certificates. The LP debuted at the top of Billboard 200. In the first week after the release, it sold 97,000 copies. By the end of the year, the number reached half a million.

The same year, Halsey worked with Justin Bieber on the song called "The Feeling" for his fourth LP Purpose. She was also nominated for the MTV Europe Music Awards as "Artist on the Rise".

In May, Frangipane released "Tokyo Narita (Freestyle)", which was produced by her Norwegian boyfriend Lido. She also worked with the band The Chainsmokers on their single "Closer". The song was a big success in Halsey’s career. Both she and The Chainsmokers were nominated for a Grammy award as "Best Pop Duo/Group Performance" and received a few more prizes and nominations. The same year Ashley won the "Rising Star" award from Billboard Women in Music. Many fans were hoping to invite Halsey to their private events and birthdays.

In January 2017, Halsey released a single "Not Afraid Anymore".  It became the soundtrack for the movie Fifty Shades Darker. In the summer, she recorded her second studio LP Hopeless Fountain Kingdom. The songs in album were inspired by the artist’s breakup with Lido. The LP topped Billboard 200. The second official single "Bad At Love” became the most commercially successful song in Halsey’s career to date.

In September 2017, Halsey began the tour in support of her second album.