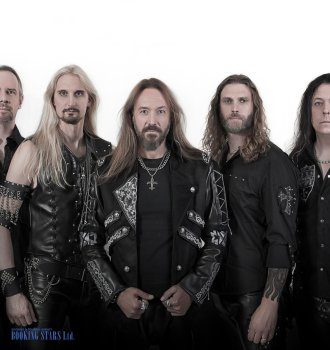 The heavy metal band HammerFall was formed in 1993, in Sweden. The current lineup includes Oscar Dronjak, Fredrik Larsson, Joacim Cans, Pontus Norgren, and Johan Kullberg. They are mostly famous for such hits as “Renegade”, “Blood Bound”, and “Natural High”.

Most of the group’s members came from a band In Flames. At first, the critics saw HammerFall as an In Flames’ side project. The band went through many lineup changes. For example, in 1997, the band performed at a Rockslaget competition with their song “Judas Priest Breaking the Law”. Right in the middle of the performance, they changed the vocalist to Joacim Cans. However, it didn’t help the group make it into the semifinals. Eventually, Joacim became the band’s lead vocalist and lead composer.

In 1997, the band signed a contract with Nuclear Blast and released their debut album Glory to the Brave, which was very successful in the Scandinavian countries and named the LP of the year by three local music magazines. HammerFall performed at the Wacken festival together with Gamma Ray and Lake of Tears. At the same time, they were joined by a new guitarist Stefan Elmgren. At the end of the year, the band received a Swedish Grammy Award.

In 1998, the band released Legacy of Kings, which reached the 15th spot on the Swedish Album Charts. They went on a world tour to support the LP together with Stratovarius and Lordi.

HammerFall recorded several Helloween cover songs, hoping to release a tribute album, but Nuclear Blast refused to release such an experiment, limiting the band to the single “I Want Out”.

In 2000, the group released the LP Renegade, which finally reached the top of the Swedish Albums Chart. The band went on a supporting tour and released a DVD The Templar Renegade Crusades.

Their next album Crimson Thunder (2002) was a step toward a style change. The group went from melodic power metal to classic heavy metal.

The band released 6 more albums, the latest one to date being Built to Last (2016) reached the 6th spot on the Swedish Albums Chart. HammerFall continues to record new songs and performs live.