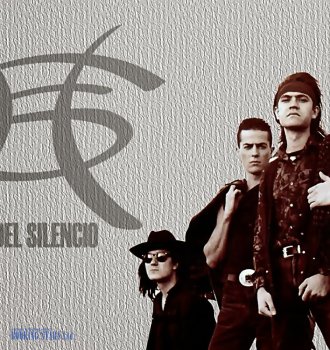 “Héroes Del Silencio” was formed in 1985 by guitarist Juan Valdivia and singer Enrique Bunbery. These guys were experienced and used to play with different rock bands. Later, the bassist Joaquim Cardiel and the drummer Pedro Andreu joined them. At the beginning, the band played in public places and tried their luck in music contests. In Salamanca, they took the second place. After the concert, Heroes signed a contract with EMI producer Gustavo Montesano. It was their breakthrough.

In 1987, they released their first EP “Héroes de Leyenda”, 30,000 copies were sold. First LP “El Mar No Cesa” was released the following year. Songs “Mar Adentro” and “Agosto” became so popular that sold 100,000 copies. In 1989, the band organized a supporting tour and released the album “En Directo”.

Next year, the band cooperated with ex-guitarist of Roxy Music and released their best-selling LP “Senderos de Traicion ”, which sold 2 million copies. In the 1990’s they started touring Europe. HDS’s established itself as the best band in Rock en Español genre, so it was a great success to book Héroes Del Silencio for any event.

In 1993, the band’s lineup was completed by Alan Boguslavsky. They met him during a concert in Mexico. The following year, the band took a vacation, changed their producer to Bob Ezrin, and released the LP “Avalancha” in 1995. Music on this LP was more commercially successful than their previous work.

From July 1995 to October 1996, Heroes gave 152 concerts in Europe and the USA as part of  “Tour macrogira Avalancha”. During it, Bunbery found time to start solo projects and recorded new songs. Relationship between the artists became difficult. Everyone understood that Burnbery didn’t see his future as part pf the band.

Their last concert took place in Los Angeles on October 6, 1996. The band announced the hiatus during the press conference in Lima, Peru. The news surprised the audience even though disagreements between Juan and Enrique were out in the open.

Luckily for fans, in 2007, the band announced a ten-day reunion tour in Guatemala City, Buenos Aires, Zaragoza, Seville, Valencia, and Monterrey, 20 years after the first LP and 11 years after the hiatus. The tour had an extraordinary success. More than 20,000 people attended each concert. After the tour, the band released another live album, “Tour 2007”.