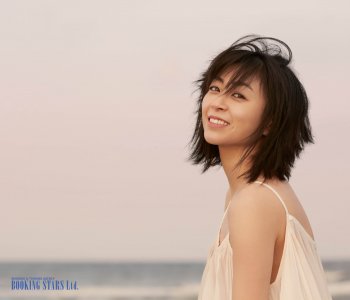 Hikaru Utada -  American-born J-pop singer/songwriter and one of the top-selling artists in Japanese history.

One of the most popular, top-selling Japanese artists of all time, singer/songwriter Hikaru Utada was a consistent presence at the top of the charts from the time of her 1999 debut, First Love, to her 2018 effort Hatsukoi, notching at least a dozen number one singles through the decades. Like contemporaries BoA, Namie Amuro, and Ayumi Hamasaki, she was a continually evolving staple of the J-pop scene, performing yearning ballads and sleek dance-pop with American-influenced vocals that made her a beloved icon of the genre, even with an extended hiatus that lasted for much of the early 2010s. She returned in earnest at the close of the decade, delivering mature works such as Fantome (2016) and Hatsukoi (2018). In 2021, she continued her extended collaborative relationship with the Evangelion anime series with the One Last Kiss EP.

Born January 19, 1983, in New York City to a traditional Japanese-style singer mother and a musician/producer father, Utada grew up in the recording studio. Her father's production job bounced her between New York City and Tokyo, with the only constant being naps and homework in the studio. She was bilingual at an early age and soon came to understand both American and Japanese cultures.

She had composed and recorded her first Japanese-language song by the age of 11 and her first album in English by 13. What stood out to the few who heard the album was what an accomplished composer Utada was. A Toshiba-EMI executive approached the singer to see if she could write her pop songs in Japanese. She could, of course, and her Japanese-language debut album, First Love, hit number one on the Japanese charts during its first week of release, breaking the record for first-week sales of a debut album, and selling over nine million copies since its release in 1999.

One Japanese-language platinum-selling album after another followed and the Japanese press took note of Utada's unique style, influenced by the alternative rock from America. Academics prevented her from giving many interviews, and her mystique grew as a result. In 2004 she announced she was moving to the Island-Universal Music Japan label and recording an English-language album. Her single "Exodus 04" became a heartbreaker for her solid fan base when her lyrics were taken as a goodbye to Japan.

The album Exodus was released in Japan on September 8, 2004, and Utada now held the record for largest-ever one-day shipment of an English-language album by doubling Mariah Carey's previous record of 500,000. Exodus mixed wistful pop and sparkling dance music, and featured producer Timbaland and Mars Volta drummer Jon Theodore. American J-pop fans were aware of her for years, but Utada got her first mainstream U.S. exposure when the "Devil Inside" single appeared in September 2004 with Rjd2, the Scumfrog, and Richard Vission handling the remixes. Exodus received its American release on Island in October of the same year and marked her first appearance on the Billboard charts.

In 2007 EMI announced that Utada had set a record for a Japanese recording artist with combined sales of 7.7 million across all formats. With no signs of slowing her momentum, she issued the Japanese-language album Heart Station in 2008, with the English album This Is the One following in 2009. She embarked on an international tour which included stops in the United States and England. When the trek concluded, Utada shocked fans when she announced an indefinite hiatus, which was preceded by a media blitz in Japan that included the release of a singles collection and farewell concert performances. During her time away from the spotlight, she lost her mother, married, and gave birth to a son.

Utada made an unexpected return to music in 2016 with the release of her sixth Japanese-language album -- and first in almost a decade -- Fantome. The comeback topped multiple album charts in Japan and South Korea, as well as Billboard's World Albums and Japanese Albums charts. A follow-up arrived in 2018. With a nod to her debut, Hatsukoi (translated as "First Love") marked her eighth Japanese chart-topper and yielded five Top Five singles, including the title track and "Anata." Another track from the album, "Chikai," served as one of the themes to the video game Kingdom Hearts III, along with the English version, "Don't Think Twice," and "Face My Fears." She closed out the decade with a collaboration with Sheena Ringo ("Roman to Soroban LDN ver.") and a tribute to Inoue Yosue ("Shonen Jidai").

The 2020s were ushered in with standalone singles "Time" and "One Last Kiss," the latter of which served as the theme for Evangelion: 3.0+1.0 Thrice Upon a Time. She released the One Last Kiss EP in March 2021, which landed her on the charts in both Japan and the U.S.