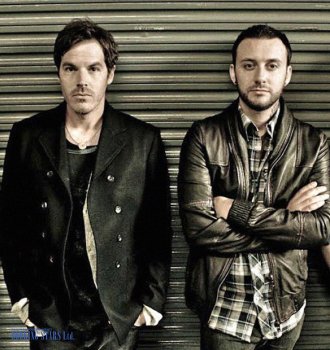 In 1994, Doug Robb and Dan Estrin, who met at a musical contest, decided to create their own band. Douglas was a vocalist and Daniel played guitar. They posted an ad and found a drummer (Chris Hesse) and bass guitarist (Markku Lappalainen). The group was dubbed Hoobastank.

Initially, the band performed at the local Los Angeles clubs, where they were rather popular. In 1997, they recorded an EP Muffins.

By 1998, the band had enough songs to record an LP. They recorded and released it on their own. The name of the album was surprisingly long - They Sure Don't Make Basketball Shorts Like They Used To. It was fairly successful but didn’t make it into the charts. However, it resulted in a contract with Island Records.

In 2000, the musicians compiled an album, which they called Forward. However, the producer decided to put off the release date. It was a bad decision since the songs made their way to the Internet. The LP was never released.

In 2001, the group released Hoobastank. In just two months, it reached the 25th spot on Billboard 200 and went platinum. The singles "Running Away" and "Crawling in the Dark" became hits, reaching the 44th and 68th spot on Billboard Hot 100 accordingly.

The band was quickly gaining popularity around the world. The musicians toured European and Asian countries. They were especially popular in Japan. At the same time, several Hollywood producers discovered the band’s songs. One of them chose "Crawling in the Dark" as a soundtrack for the movie The Fast and The Furious. The single "Losing My Grip" appeared in The Scorpion King.

The same year, Hoobastank released the EP The Target, which featured three new songs "Open Your Eyes", "The Critic," and "Never Saw It Coming".

Under the guidance of the producer Howard Benson, the band recorded a new album. The Reason saw the light in 2003 and became a success all over the world, reaching the 3rd spot on Billboard 200. The most popular hits from the LP were "The Reason" and "Same Direction." The former was nominated for a Grammy and MTV Video Music Awards.

In the beginning of 2005, Hoobastank received an MTV Asia Award as the Favorite Rock Act.

The third LP, Every Man for Himself, was released in May 2006. The band substantially changed their style, which reflected on the popularity of the album. This one brought the group a gold certificate.

Hoobastank released their next studio album in 2009 and called it For(n)ever. One of the songs "I Don’t Think I Love You" was featured in the movie Transformers: Revenge of the Fallen. In December, the band released Live From The Wiltern on iTunes.

In 2010, Hoobastank released two new singles. "We Are One” came out to support the survivors of the Haiti earthquake. "Never Be Here Again" became 2010 AT&T Team USA Soundtrack.

In 2010, the band released an acoustic album Is This the Day?

In 2012, Hoobastank recorded Fight or Flight. The leading singles were"This is Gonna Hurt" and "Incomplete".

In November 2016, the band started recording their sixth studio album. By January 2017, the work was completed. The release is planned for the first half of 2018.