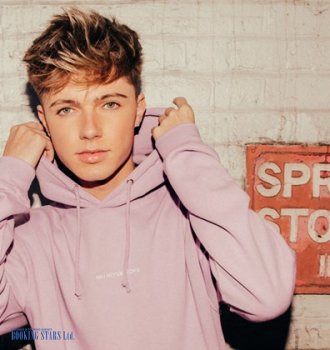 HRVY’s real name is Harvey Leigh Cantwell. The pseudonym is the abbreviation of his full name. The musician was born on 28 January 1999. Harvey began conquering the music industry when he was just 14 years old. The singer was born in Kent in a family with a low income. He has two brothers. None of the family members are musicians.

Harvey became interested in music very early. He worked hard to find his own special style. The singer enjoyed performing for his friends, who acted as fans and critics. Thanks to their support, Cantwell decided to upload his work to Facebook. There, he was noticed by the ex-member of the band East 17, who worked as a manager. Blair Dreelan helped Harvey sign a contract with Universal Music. In 2013, he released a debut single “Thank You”, which didn’t make it into the charts.

Even though Harvey was just starting his career, he managed to become friends with professional musicians. In 2014, M.O. invited him to participate in his Salute Tour. The next year was devoted to the search for a new style. Harvey worked hard to perfect his techniques.

In 2016, the artist got a chance to try his talents as a TV host. At that time, he was only 17 but managed to do an excellent job. He was hired as a full-time host to BBC’s Friday Download. He also landed a role on the YouTube channel Brats. In the series Chicken Girls, he plays Miles.

The year 2017 was busy for Harvey. He released his debut EP, Holiday. The album was recorded together with Universal Music. Among the popular songs on the EP were "Holiday" (recorded with Redfoo), "La La La La (Means I Love You)" (recorded with Stylo G), and "Phobia".

In November 2017, Harvey recorded his second EP, Talk to Ya. It featured such successful songs as "Talk to Ya", "I Won't Let You Down", and "Personal”. The latter was the first song recorded by HRVY to appear in the charts. It reached the 62nd spot on UK Singles Chart, the 33rd spot of Scottish Singles Chart, and the 94th position on Irish Singles Chart.

In April 2018, the artist released a non-album song “Hasta Luego”. It reached the 70th spot on the UK Singles Chart and the 13th position on Scottish Singles and Albums Chart. The song was recorded together with Malu Trevejo. The music video for the song was uploaded to YouTube. In just a few months, it collected more than 34 million views. Many fans tried to book HRVY for private events.

The same year, Harvey recorded one more non-album song "I Wish You Were Here". It climbed to the 52nd spot of Scottish Singles and Albums Charts but didn’t make it into British charts just yet.

Harvey also appeared as a guest in other artist’s songs. For example, together with Sigala and Nina Nesbitt, he recorded “Somebody”. To support The Vamps, the artist performed on their Night & Day Arena Tour. The tour allowed the singer to get a priceless performance experience.

HRVY is working hard on his new songs and planning to record a studio album. In 2019, he is going on a Four Corners Arena Tour with the Vamps.