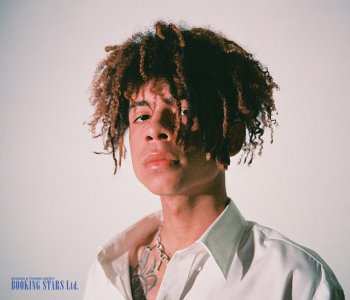 Iann Dior - Michael Jan Olmo was born on March 25, 1999 in Arecibo, Puerto Rico. He grew up in the Tommo and Anabel Olmo family with his sister. They later moved to Corpus Christi, USA, where Michael spent his early years. There he also began to get involved in music and record the first tracks.

It is known that the performer experienced an unsuccessful relationship, which is the main part of his repertoire. The celebrity prefers not to talk about other details of his personal life, focusing on his creative achievements.

The rapper's career began in 2018. The young man went through a difficult parting and decided to splash out emotions into music. He took the pseudonym Olmo, under which he began to spread the tracks of his authorship on the Internet. Soon there were enough of them to release the album A Dance With the Devil. The popularity of the record gradually grew, and after it gained more than 10 thousand auditions, the guy thought about continuing the singer's career.

Michael's voice and rapping style attracted the producer from TouchofTrent. He helped Olmo get in touch with cinematographer Logan Mason to begin filming his debut video. The recording fell into the hands of Internet Money representative Taz Taylor, who invited the artist to Los Angeles for further collaboration.

During this period, the young man decided to change his pseudonym to Iann Dior (Yann Dior). The breakthrough in the rapper's creative biography was the release of the composition Cutthroat, created in collaboration with Nick Mira. The track reflects the strong feelings of the star after an unexpected break with her beloved. It conquered netizens all over the world and received over 1 million plays.

The success inspired the artist to continue to create. He released songs Molly, Romance361 and Emotions that resonated with netizens. A lyric clip was filmed for the latter, in which the fatal beauty kidnaps a guy and then digs a grave for him. The video has received over 11 million views on YouTube. Later in an interview, Michael admitted that the composition and the video are dedicated to the beginning of his experiences related to the breakup, he called the hit the starting point of the story.

The hype surrounding Iann Dior tracks helped him secure a contract with 10K Projects and start working in a recording studio. Nothings Ever Good Enough's debut mixtape soon followed. It includes previously released songs and several new ones. The collection was created in collaboration with such stars as PnB Rock, Juice WRLD and Bernard Jabs. It was released on April 12, 2019 on iTunes and Spotify. Emotions was used as a single.

Shortly after the successful release of the mixtape and the growth of the audience, the rapper announced work on a second album. Although for the performer under the pseudonym Iann Dior, he made his debut, since the first disc was released under the name Olmo. Singers such as Travis Barker, Trippie Redd and POORSTACY joined the band during the studio recordings.

The new album was added to the discography in November 2019 under the name Industry Plant. It includes 15 tracks produced by Nick Mira and a group of guest musicians. The release of the album was preceded by the shooting of clips for such compositions as Darkside and Gone girl, which received positive feedback from Internet users.