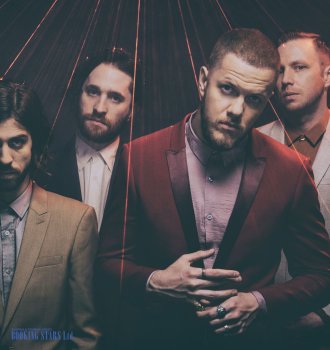 Imagine Dragons is well known for its high-quality original music and different genres. Musicians work with pop, rock, indie-rock, and electronic music. In the lyrics, they discuss social problems. The majority of songs created by Imagine Dragons is energetic. This attracts many fans of all ages from all over the world.

The band’s leader is Daniel Reynolds. He wanted to become a musician since childhood. When Dan was six, he started learning how to play the piano. At 13, the teenager borrowed his brother’s computer to work with music. He used simple equipment to record first songs about his feelings and disappointments.

The band Imagine Dragons was formed in 2008 when Daniel met Andrew Tolman, who became the group’s drummer. The two young men attended the same university and became friends thanks to similar hobbies and views on life. They decided to form a rock band. The musicians also invited Andrew Beck (guitar player), Dave Lemke (bass guitar player), and Aurora Florence (violin and keyboards player). It’s worth noting that the lineup of the band changed several times.

Today, Reynolds is the only one left out of the initial lineup.

The first step toward fame was made when the artists won a Battle of Bands, which was arranged at the University of Utah. They released the first song “Speak to Me” in 2008. After that, Reynolds decided to move to Las Vegas for more opportunities. The band followed him. In the new city, the group started performing in casinos and strip clubs.

The first success came to Imagine Dragons when they performed at the music festivals, Vegas Music Summit and Bitе of Las Vegas. They appeared in front of thousands of listeners and made their stand. Young musicians were being invited to radio shows and some labels offered them contracts. Eventually, the group accepted an offer from Interscope Records.

Before signing that contract, Imagine Dragons released three EPs. The first one, Imagine Dragons, came out in 2009. A year later, they presented Hell and Silence and It's Time. The fourth EP, Continued Silence, appeared with the assistance of Interscope Records and brought the band immense popularity. Many fans started trying to book Imagine Dragons for private events, but they were busy with studio work.

All of the above albums earned positive reviews from the critics. Musicians used the feedback to record the debut LP. Night Vision came out in September 2012. The producer was Alex da Kid. The album sold more than 80,000 copies in two weeks. After some time, it earned gold status in seven countries and became platinum in fourteen.

The next EP recorded by the musicians was The Archive. At about the same time, they released several soundtracks to movies and video games. After that, Imagine Dragons began working on the next LP and embarked on a tour of the USA and Europe to support the previous album.

In 2015, the artists presented a new LP, Smoke + Mirrors. The album sold over a million copies in the United States and topped numerous charts. To support it, the band embarked on a 9-month world tour. The LP was slightly less commercially successful than the debut album. However, it earned numerous positive reviews from critics.

After releasing the second album, musicians decided to take a short break from the studio recordings and released a documentary about their work. Two months later, Imagine Dragons recorded several soundtracks, one of which was used for the movie, Suicide Squad.

In 2017, the band recorded its third LP, Evolve. It featured such hits as "Whatever it Takes", "Thunder", and "Believer". Next year, on Twitter, the musicians announced several new singles. Among them was their next hit, "Born to Be Yours".

In 2018, the band announced the new album, Origins, which came out in November. Leading singles were “Natural” and “Zero”. The LP came in second on Billboard 200 and reached high spots on the charts in many countries.

At the beginning of 2019, the artists performed during the halftime of the College Football Championship. Together with Lil Wayne, they sang their hit “Believer”. In June, they presented a new single “Birds”, recorded with Elisa.