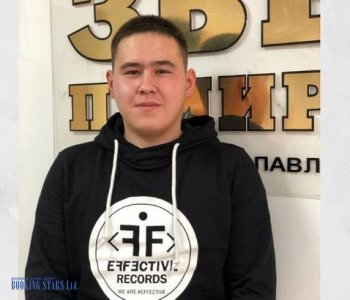 Imanbek was born in Aksu, Pavlodar region, Kazakhstan, he played the guitar when he was 8 years old.

While studying at the Railway Institute, he began working at the railway station in Aksu, but continued to engage in remixes since 2017, when he was 17 years old. He remixed "Roses," previously released by Guyano-American rapper Saint Jhn through the Russian label Effective Records, who signed him.

The remix was made without Saint Jhn's involvement, as Imanbek Zeykenov's attempts to contact him on Instagram failed and he received no response.

A remix of this song appeared on a large number of charts across Europe, including Belgium, Hungary, the Netherlands, Poland and Sweden, and peaked at number 3 on the Shazam World Top .

Based on the success and popularity of the remix, the original song, recorded in 2016, has appeared on the US Billboard, British Singles Chart, and other countries such as Austria, Canada, Denmark, France, Germany, Ireland in 2019.

The song "Roses" was released in 2016. She didn't appear in the charts. Her author, the promising Brooklyn rapper SAINt JHN, did not make a star.

Three years later the track was dug up by a railway worker from Kazakhstan, made a dance remix on "Roses" and posted it in his public. It was liked by 10 subscribers.

Fast forward six months: the remix of 18-year-old Imanbek Zeykenov breaks the charts of Russia, Ukraine and Belarus. Kazakhstan TV channels, one after another, shoot stories about a new star.

Rewind for another couple of months: the remix "Roses" became the number 1 song in the world Shazam rankings and hit the top 25 of the American Billboard chart - a rarity for our musicians.

What did Imanbek buy with the first money the song brought him? Did they communicate with SAINt JHN? And is he afraid to remain the author of one hit? Read the story of Imanbek Zeykenov, told in the first person.

I heard about the Billboard chart, but I found out about how cool it is when my track got there. First to 55th place, a week later - to 39th. After another couple of weeks - on the 22nd. To put it mildly, ofigel.

I am one of the first East European artists there. Before me was Edward Maya, an electronic musician from Romania. His "Stereo Love" was number 11.

At first, "Roses" was popular in the CIS, and at the end of 2019 it became a hit in Greece and Poland. In Turkey, two of my remixes were in the top 3 at once - these are SAINt JHN "Roses" and Gio Pika "Fountain with a Dolphin".

Gio Piku is forced by such pseudo-bandits - wouldn't it be a shame if I call them that? Filming vidos where they drive "priors". This remix was offered to me to jointly make Adam Maniac, a very popular remixer from Makhachkala.

At the beginning of 2020, the "Roses" wave went further to the West: first place in Germany, England. Top 50 in America. I monitored the distribution of the song through the Shazam charts. This is the most honest indicator of which song is in demand and where. Now I'm in first place in the world.

A censored version of "Roses" had to be made for German radio. Then SAINt JHN sent me an acapella, I cut out all these "n ****" and "shit".

It all started with the fact that on March 21, 2019, I just uploaded my remix to VK. I didn't bet on it at all, that's why I posted it during the day, when fewer people are online. I thought: "Who will listen to this? I'm ashamed." I didn't like the drunk vocals on this track. Not a fan of that sound. In general, 10 people polaikali him. And that's all - he continued to release remixes, also unofficially. And a couple of months later it began: reposts, shazams, messages. The millionaire public Emporio Armani 7 posted it without mentioning the original author, simply: Imanbek "Roses". From there the first wave started.

Kirill Dzham from Effective Records invited me to make an official release of the remix. I thought it was just a stream of the track, a Vkontakte release with a cover, but no - he, it turns out, agreed with SAINt JHN and his label, and the track was released officially. If they hadn't done this, the copyright holders could have blocked my remix, removed it from everywhere, or maybe punished me. Now Kirill is my manager.

Before that I was offered a contract by Lithuania HQ Records, which is quite popular in the e-dance field. He publishes Dynoro, Gaullin, Lucky Luke. Lithuania HQ offered two options: we use the part of SAINt JHN and pay him a percentage of the sales, or we pay one-time "cleaning" of the acapella so that another performer will re-record it in a new way. But I still preferred the label from Russia.

I was lucky. The success of my remix is ​​pure luck, I perceive it adequately.

I have never paid for an advertisement in my life. Maybe because I believed: someday I will become number one in Shazam. Once upon a time I made a fake screenshot, where I am in the first place, and posted in stories: "Guys, check out the joke!" And recently, when "Roses" really became the first in the world, I sent that fake screenshot into history for close friends on Instagram along with a new, real one. Emotions overwhelmed.

They wrote about "Roses" that it is popular on TikTok, but I have never sat in it. My friend Adilzhan downloaded TikTok to his phone, and in the evening with the guys in the car, we decided to see what was there. Scrolling through the tape - and in every fifth video "Roses" sounded.

This was the first challenge, and now the second is on its way. A challenge is when people popular on TikTok come up with some kind of a bunch of movements or actions for your song and their multi-million audience starts to pick it up, and others pick it up. The first challenge was when a question was written at the top of the screen, and the person pointed to the list of answers in rhythm. The second challenge was a dance with a couple of easily reproducible movements.

When I saw my music playing in every fifth video, I felt proud. Words cannot describe it. Even now, sometimes, I leaf through the tape, and I see beautiful girls dancing to "Roses". I watch their videos and think: "Oh, you only knew who did it!"

When stories began to appear on television in Kazakhstan: "A 19-year-old railroad worker hit the charts," people began to add to me on Instagram, they began to recognize me on the street, take pictures.