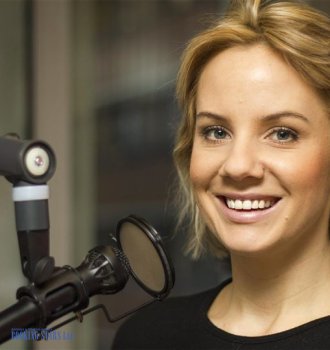 Ina Christine Wroldsen was born on 29 May 2984 in a small Norwegian town, Sandefjord. Ina became interested in music very early and practiced her skills in her free time. When she turned 17, Wroldsen participated in the music contest Fame Factory, which was arranged on a Scandinavian channel TV3. She won the contest and decided to devote her life to music.

In 2004, Ina released her first single, “Suddenly” with the assistance of Waterfall Records. The debut song didn’t become successful. The young singer continued her hard work and released another single “You Could Only See Me”. In 2005, she presented one more song “Sorry”. Neither of the two became popular. IN 2006, Wroldsen realized that she might not make it as a singer. However, the artist didn’t give up. She decided to keep developing her impressive songwriting talent. Ina began writing songs for other artists.

In 2007, Maria Arredondo recorded Ina’s song “You Could Only See Me” and made it a part of her LP, For a Moment. Ina moved to London and, together with other songwriters, began working with a British- Irish girl band, The Saturdays. The young woman helped record eight tracks for the group’s debut LP, Chasing Lights, two of which, “Up” and “If This Love”, made it into the top-10 of the British charts.

In 2009, the artist wrote a single “My Man” for a debut LP of the British singer Jade Ewen. It climbed to the 13th spot of Top 40 R&B Singles Chart. In the next several years, Ina worked with many successful singers and groups, among them were Britany Spears, Melanie C, Pixie Lott, Leona Lewis, and many others.

For The Saturdays, Ina has written numerous hits. In 2012, she worked with a Barbados group Cover Drive to record a single ‘Twilight”, which topped the British charts. In 2013, at a talent show The X Factor, James Arthur won the first prize with his version of the single “Impossible”, written by Ina for a Barbados singer Shontelle. The song reached the top-10 of the British chart in 2010.

In 2013, Ina wrote the single “Bombo” for a Norwegian singer Adelen for her performance at Eurovision. Even though the artist didn’t make to the finals, in Norway, “Bombo” topped the charts for three weeks in a row.

While working with other artists, Ina has written numerous songs. In 2013, she signed a contract with Reverb Music/Reservoir Media Management to represent her. Before that, she met a Swedish songwriter and producer Arnthor Birgisson. He inspired Wroldsen to resume her work as a singer. Ina and Arnthor formed an electro- pop duo Ask Embla. The name came from the Scandinavian folklore, in which Ask was the first man on Earth and Embla was the first woman.

The duo began working on the first album. In 2012, they presented two singles, “Cry Baby” and “Father's Eyes”. The latter was very popular in Norway, reaching the top spot of the local chart, VG-Lista. The music video for the single was also successful. In 2013, Ask Embla presented its first album, Northern Light.

After the album’s release, Ina decided to pursue a solo career. In 2014, she recorded a single, “Aliens (Her er jeg)”. In 2015, “Rebels” came out. The same year, Ina participated in recording a single “How Deep Is Your Love” for DJ Calvin Harris and Disciples. The song topped the UK Dance Singles Chart.

In October 2017, Ina presented her next single “Strongest”, which came in second on VG-Lista. It was featured in the singer’s EP, HEX, which came out in June 2018. Many organizers started trying to book Ina Wroldsen for their private events.

Ina is married to Mark Ellwood, who is her manager. They have a son, William. Wroldsen continues recording hits and working as a songwriter.