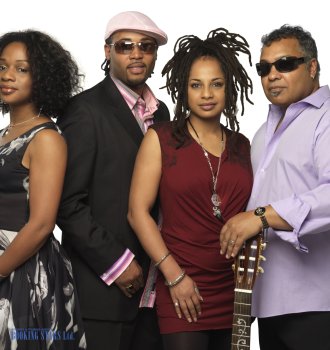 Incognito is a British group that got together in 1979. Their main style was acid jazz. The band was established by Jean-Paul “Bluey” Maunick and Paul “Tubbs” Williams. They both used to play in a group called Light of the World. After releasing their third album “Check Us Out”, Maunick and Williams made some slight rearrangements within the group and changed the name to Incognito. The first single released under the new name was “Parisienne Girl” (1981). The same year they recorded their first album “Jazz Funk”. It got into top-50 of the UK and Swiss music charts.

Then the group went on a 10-year break and didn’t release any albums. In the beginning of the 1990’s, the legendary DJ and a big fan of Incognito Giles Peterson founded a recording studio Talkin’ Loud and started signing contracts with various musicians. In 1991, when acid jazz was conquering the UK, Incognito’s single “Always There” got into the top-10 of British, Dutch, and Swiss charts. Then Incognito released their next album “Inside Life”, which was mostly a studio album. It was recorded together with many talented musicians from all over the UK.

In 1992, while working on “Tribes, Vibes & Scribes'' Maunick invited a famous American vocalist Maysa Leak. The album became popular since the modern jazz was on the rise. Incognito’s third album “Positivity” (1993) became the most popular in the band’s discography. They continued to release new albums but got less recognition.

Incognito doesn’t have any permanent members. The project involves many different musicians from all over the world. Jean-Paul Maunick handles the project since the beginning and works with any talented artists that come his way. His goal is to support the talent. Maunick calls all the musicians that have ever worked on the project “The Incognito Family”.

Since 1981, the group released 17 studio albums, 5 remix albums, 3 live albums, and over 40 singles. The project is still in full swing.