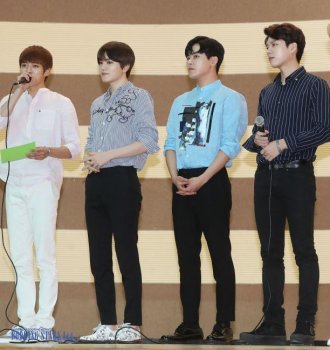 The lineup of Infinite includes six members, Sungkyu, Woohyun, Dongwoo, Sungjong, L, and Sungyeol. All of them are vocalists. Dongwoo is also a rapper. The group was formed in Seoul in 2010 with the assistance of Woollim Entertainment.

Before becoming a part of the group, Sungkyu, Woohyun, L, and Sungyeol already had some performance experience. They performed as back vocalists for the band Epik High, which sang at the Olympics in Vancouver. Later, they appeared in Epik High’s music video for the single “RUN”. The debut solo performance of the group was arranged at the reality show You Are My Oppa on Mnet in April 2010. At that time, some organizers already tried to book Infinite for private events in South Korea.

The band’s first EP, First Invasion, appeared in June 2010. The lead track “Come Back Again” became a huge local hit. The EP reached the 10th spot of the national chart. It sold about 53,000 copies, which was a great result for a young group.

In 2012, Infinite presented the third EP, Infinitize. It sold over 150,000 copies. The EP was the first project, which brought the band international popularity. It reached the 18th spot of the Japan Oricon Weekly Album Chart. In South Korea, the album came in second on the weekly chart, third on the monthly, and 10th on the annual charts.

In March 2013, the group recorded another EP, New Challenge. It featured such hits as "Man in Love (남자가 사랑할 때)" and "Still I Miss You (그리움이 닿는 곳에)". In South Korea, it climbed to the top of the national chart and came in 16th on the Japanese chart. Just three months later, the group presented its first album in Japanese, Koi ni Ochiru Toki. It became a big hit in Japan topping the daily and weekly charts. The album also came in sixth on Japan Oricon Monthly Album Chart.

In 2014, the artists presented another LP, Season 2, which featured such hits as "Last Romeo", "Back", "Memories", and "Follow Me". The Japanese version Be Back appeared 3 months later. Both versions were very successful in South Korea, reaching the top of the national chart. They also fared well in Japan and Taiwan.

In July 2015, the group presented the next EP, Reality. It climbed to high spots on weekly, monthly, and yearly national charts. The same year, the artists released the first live album, One Great Step Returns Live. At the end of the year, Infinite presented another LP for the Japanese audience, For You.

In May 2017, Infinite released one more album for the Japanese audience. Air climbed to the sixth spot of the Oricon chart.

In 2018, the new LP, Top Seed, came out. It appeared on the top of South Korean Gaon Weekly Albums Chart and reached the 4th spot of US Billboard World Albums.