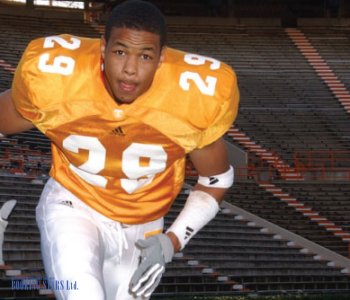 Inky Johnson (Born February 12 , 1986) is Motivational speaker and author who suffered an injury during a college football game which left him with paralysis in his right arm. He used the experience to advocate for the disabled and write the autobiographical book Inky: An Amazing Story of Faith and Perseverance.

Inky Johnson is a former University of Tennessee Safety. Johnson grew up living in his grandparents' two-bedroom house with 13 other family members. He slept on a pallet on the living room floor. According to Johnson, drugs and violence surrounded him in Kirkwood, Georgia.

He and his family moved five times in nine years, all within Kirkwood. Stability was non-existent. He loved his Kirkwood friends and his family. He just knew to survive he had to get out.

He had a career-ending injury on a tackle against Air force on September 9, 2006. With just a few minutes to play in the game, Johnson went for a tackle and jammed his shoulder into the body of the Air Force running back . The hit caused nerve damage in Johnson's right shoulder and ended his playing career.

Dr. Russ Betcher, team doctor at the time, discovered on the field that Johnson's eyelid was drooping, a sign of nerve damage called Horner's syndrome. Spotting the symptom allowed doctors at UT Medical Center to stop internal bleeding and ultimately save Johnson's life. Surgery helped some, and even a trip to the Mayo Clinic in Minnesota held promise.

Inky lives in Atlanta, Georgia and is a devout Christian. He now works as an inspirational speaker.