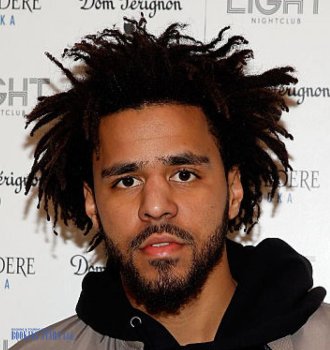 Jermaine Lamarr Cole was born on 29 January 1985 on the USA military base in Frankfurt, Germany. His father served in the U.S. Army. Shortly after Jermaine’s birth, his parents divorced. With his mother and brother, Cole moved to Fayetteville, South Caroline. The future star’s mother worked at the postal service to support the children.

Cole loved music since childhood. It was his second hobby after basketball. But eventually, the boy chose music. He started writing lyrics at 12. Jermaine’s mother approved of his hobby and bought him a music sampler for Christmas. At that time, the young rapper created songs under the pseudonym Therapist. Later, he joined the local group Bomm Sheltuh. Cole practiced his vocal skills and worked as a duo’s producer.

After graduating high school, Cole enrolled in St. John’s University in New York, where he studied business and communications. While in the university, Cole was an active member of the student community. He performed at the school concerts and was the head of the pan-African student coalition. Eight years after he graduated, Cole came back to the university to return a library fee and officially get a diploma.

After graduation, Cole came back to North Carolina, where he found numerous jobs, which didn’t have anything to do with his degree or music. He sold newspapers, collected bills, and even worked at the ice-skating rink. However, the young man hasn’t given up on music. Since 1999, he has been uploading his work to the Internet under the pseudonyms Blaza and Therapist., Eventually, his work was noticed.

In 2007, the artist released his first mixtape, The Come Up. The album featured 21 songs, containing the work of such artists as Kanye West, Nas, Jay-Z, and Ghostface Killah. Two years later, Cole released another mixtape, The Warm Up. It featured such popular songs as "Lights Please", "I Get Up", "World Is Empty", and "Dollar and a Dream II". The third mixtape, Friday Night Lights, came out in 2010. A year later, it brought J. Cole a prize at BET Hip Hop Awards for Best Mixtape of the Year.

The same year, the rapper released his debut LP called Cole World: The Sideline Story. To promote the album Cole went on Cole World..World Tour. The album topped US Billboard 200, US R&B/Hip Hop Albums, and US Rap Albums Charts. It earned a platinum certification in the USA. The single “Work Out” became an international hit. At that time, many organizers tried to book J. Cole for their events.

Between 2009 and 2011, Cole toured the world. He worked with Jay-Z on his Fall Tour, assisted Wale on his Attention Deficit Tour, and collaborated with Rihanna on her Loud Tour. In 2012, the singer went on The Campus Consciousness Tour with Big K.R.I.T. and on Club Paradise Tour with Drake. The collaboration with such famous artists only added to Cole’s popularity.

In 2013, the rapper presented two EPs, Truly Yours and Truly Yours 2, as well as the second LP, Born Sinner. The LP turned out just as successful as its predecessor, earning various platinum certifications and showing up on high spots on the charts. To support his work, in 2013, Cole went on What Dreams May Come Tour and Dollar & A Dream Tour.

In 2014, the singer presented a new mixtape and a new album. The LP, 2014 Forest Hills Drive, topped US Billboard 200, US R&B/Hip Hop Albums, and US Rap Albums Charts. It also became popular in Europe. All singles from the album earned a myriad of platinum statuses all over the world. The biggest hits were “Apparently” and “Wet Dreamz”.

Between 2014 and 2015, the artist toured the world. Besides promoting his own album, he participated in the tours of such musicians as Eminem and Dreamville.

In December 2016, the musician presented his fourth LP, 4 Your Eyez Only. Again, the album was extremely successful. It reached high spots on the charts and earned a platinum certification in the USA. The single “Neighbors” became an international hit.

In April 2018, Cole presented one more hit album, KOD. Then the artist went to promote it on the KOD tour. The LP climbed to top positions on the charts.

J.Cole is on the pinnacle of his career. He records new hits and performs live.