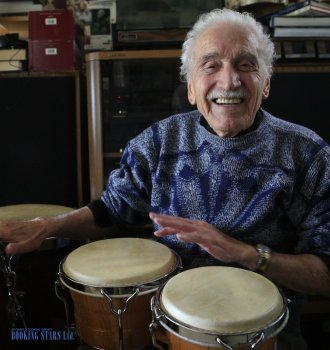 Jack Costanzo was born on 24 September 1919 in Chicago, Illinois. He is a famous percussionist and plays bongo and congas. Many fans know Costanzo under a pseudonym, Mr. Bongo. Jack traveled a lot and visited Cuba several times. There he discovered Afro-Cuban music style. In the early 1940’s, he polished his bongo and congas-playing skills.

Initially, Costanzo was a dancer. He and his wife performed in local venues before the start of the Second World War. During the war, he served in the navy. After the war ended, Jack got a job as a dance teacher at the Beverly Hills Hotel. There he was noticed by one of the members of a local Latin band Bobby Ramos. Ramos accidently heard how Jack played the bongo and invited him to join the group. From that moment, Costanzo became a famous musician. He was often invited to perform with different groups, including Lecuona Cuban Boys, Desi Arnaz, and Rene Touzet.

The real fame came to Costanzo in 1947 when he joined Stan Kenton Orchestra. The leading arranger of the group created a special arrangement so Costanzo could demonstrate his bongo-playing talent. “Bongo Riff” became very successful. In the late 1940’s, Costanzo recorded several songs for the band, including "Fugue for Rhythm Section," "Journey to Brazil," and "Chorale for Brass, Piano, and Bongo."

In 1949, Costanzo left the band to work with American jazz musician Nat King Cole. At that time, he started recording solo albums. With Cole, Costanzo created such famous songs as "After Midnight" and "Mucho Calor." In the 1950’s playing bongo became very popular. Mr. Bongo was often invited to work with different bands and labels. It was still possible to book Jack Costanzo for a private event but it was becoming harder and harder.

In the 1950’s and 1960’s Costanzo landed several roles in the movies and TV series. He performed in the telenovela Staccato and such movies as Thrill in Brazil and Visit to a Small Planet. At the same time, Costanzo created his own group, Jack Costanzo and His Afro-Cuban Band, together with which he performed in the USA and abroad. Many Hollywood celebrities, such as Marlon Brando and Gary Cooper asked Costanzo to teach them how to play bongo.

In 1988, Costanzo decided to retire and left the music world for 13 years. He suddenly came back in 2000 and recorded a successful album Back from Havana. Then he released several more albums. Even though Costanzo will soon celebrate his 100th birthday, he continues working on new songs.