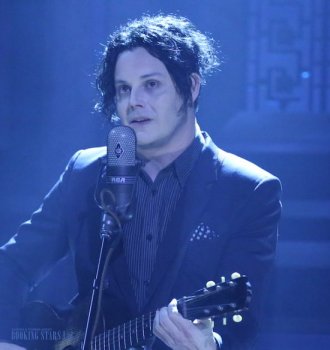 Jack White (John “Jack” Anthony Gillis) was born in 1975 in Detroit in a big Catholic family. John’s parents tried to bring him up as a religious Catholic so he could become a priest. However, Gillis had other plans. He became interested in blues and rock. One day, the boy climbed to the attic and found a drum set, which seemed to have belonged to one of his older brothers. John learned to play it. Eventually, he refused to attend a seminary and studied in a regular high school. While studying, Gillis played drums and trombone in the school band.

After graduating from high school, he became an apprentice in the furniture upholstery shop. The owner enjoyed punk rock and offered Jack to create a band. They called it The Upholsterers and recorded an album, Makers of High Grade Suites, which didn’t manage to become successful. Three years later, Jack started his own upholstery business; however, he never enjoyed the work. In 1994, he joined a Detroit group Goober & the Peas as a percussionist.

In 1996, Jack married his long time love Meg White, whom he met while still in high school. John adopted his wife’s last name. In 1997, Meg learned how to play the drums. She had obvious talent. The couple decided to form a duo called, The White Stripes.

In March 1999, The White Stripes signed a contract with Sympathy for the Record Industry and released a single "The Big Three Killed My Baby". In June, they presented their first LP, The White Stripes, which was dedicated to a deceased blues singer, Son House.

In June 2000, the duo released one more LP, De Stijl, which they named in honor of a Dutch artistic movement. It reached the 38th spot on US Independent Albums. After the album’s release, John abandoned his upholstery business. He and Meg got a divorce but continued to work together.

In July 2001, the band presented its next album, White Blood Cells. The garage rock LP climbed to the 61st spot of Billboard 200.

In April 2003, The White Stripes recorded, Elephant, which the critics called the most successful album ever presented by the duo. It topped the UK Albums Chart and came in 6th on Billboard 200. In 2004, the LP brought the group a Grammy Award for Best Alternative Music Album.

In 2005, Jack White, Brendon Benson, Jack Lawrence, and Patrick Keeler formed a band called Raconteurs. The same year, Jack married a supermodel and singer Karen Elson, with whom he had two children. In 2006, Raconteurs presented an LP, Broken Boy Soldiers.

In July 2006, The White Stripes released Get Behind Me Satan. The album came in third on British and American charts. The duo’s next album, Icky Thump, which came out in 2007, featured garage rock songs and topped the UK Albums Chart. The LP also settled on the 2nd spot of Billboard 200.

In 2008, Jack and Raconteurs recorded the second LP, Consolers of the Lonely. The album earned a Grammy Award for Best Engineered Non-Classical Album.

While touring with Raconteurs to promote the album, Jack caught a cold. The group asked Elison Mosshart from The Kills to sing for him. She did such a great job that they decided to record an album together. The work began in 2009. The new group The Dead Weather was formed.

In July 2009, Jack White and The Dead Weather released the first album, Horehound. It topped US Top Alternative Albums and US Top Tastemaker Albums Charts. The LP came in 2nd on US Top Rock Albums Chart.

In May 2010, the group presented its second album, Sea of ​​Cowards, which came in 3rd on US Top Rock Albums Chart and settled on the 5th spot of Billboard 200.

In 2011, The White Stripes disbanded and Jack decided to do some solo work. In 2012, White released his first LP, Blunderbuss. It reached top spots on many charts. In 2014, White presented the second LP, Lazaretto, which was inspired by the lyrics he wrote more than 19 years ago. The album topped numerous charts, including Billboard 200. Many organizers tried to book Jack White for private events.

In March 2018, Jack presented his third solo album, Boarding House Reach. It topped Billboard 200 and came in 5th on the UK Albums Chart.