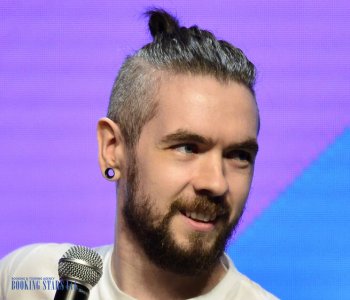 Seán McLoughlin, known as JackSepticEye on social media, is an Irish YouTuber and gamer known for his gaming videos on YouTube and Twitch. The Irish talent started his YouTube account years ago but didn’t upload any videos at first. When he did start uploading daily videos, he quickly grew to become a popular face in gaming and signed with Disney’s Digital Network and later, WME.

Seán McLoughlin, known as JackSepticEye on social media, was born on February 7, 1990 in Cloghan, County Offaly, Ireland. Sean got the nickname “Jack Septic Eye” after he was playing football and got an eye injury while growing up.

Prior to his career as a YouTube star, Sean was a drummer with the heavy metal band “Raised to the Ground.” The band released an EP in 2009 titled “Risen from the Ashes.” He later moved away.

Sean started his social media journey in 2007 when he made his YouTube account, but he didn’t upload any videos until 2012. He started by uploading gameplay videos, and a year after posting these videos, the gamer was mentioned in a PewDiePie video. The mention resulted in a huge spike in popularity for Sean: it was his big break. He went from 2,500 subscribers to 12,000 subscribers in just 24 hours.

Later in 2016, Sean was one of the first YouTubers signed under PewDiePie’s network Revelmode.

The gamer starred in the second season of the YouTube show “Scare PewDiePie.” The season ended up being canceled once evidence surfaced that PewDiePie had used racial slurs. That same year, Sean released a video to his channel addressing the controversy. Following the controversy, Revelmode was shut down by Disney.

Sean signed with the Disney Digital Network. In 2017, Sean was featured on a number of platforms: he was on the D | XP show on Disney XD, and he hosted the Level Up! Games panel at the D23 expo. In addition, he became a playable character in the prison-escape game “The Escapists 2.” He also toured on the “How Did We Get Here” tour and later joined the Game Grumps on one of their gaming sessions.

In 2018, Sean signed a deal with Twitch as part of Disney’s Digital Network to produce exclusive content for Twitch. That same year, he had Ryan Reynolds on his channel playing a Deadpool video game with him.

In 2020, Sean announced he would be taking a break from social media — which lasted about a month or so. He said in the video that daily uploads exhausted him, and with the current political climate of the world, he didn’t have the same passion for his work as he previously did.

In August 2020, he returned to his channel and has since been going back to daily uploads.

Ever since becoming popular on YouTube, Sean has given a chunk of his money away to charity.