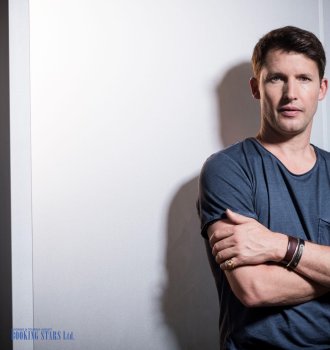 James Blunt was born on February 22, 1974, in England. He is a singer and songwriter, mostly famous for such songs as “You Are Beautiful”, “Goodbye My Lover”, “1973”, and “Bonfire Heart”. James served in the British army. The four-year service seriously influenced his songs. He holds numerous awards, including BRIT and MTV Music.

Blunt’s family has been serving in the army for centuries. Each male in the family was somehow connected to the military. James’ father was a colonel, who didn’t approve of his interest in music. When Blunt was a kid he rarely heard any songs besides “Happy Birthday” and “Silent Night”. When he was 7 years old, James was admitted to a military residential school. But when the boy turned 14, he suddenly became very interested in music and learned how to play the guitar. He also took piano lessons and enjoyed listening to Queen and Dire Straits.

James studied at Bristol University, but in 1999, his father insisted that he volunteer for a Blues and Royals squadron that was going to Kosovo. James went and took the guitar with him. While serving, he didn’t forget about his hobby. Until 2002, it seems as if James was planning to stay in the military just like dozens of his ancestors. But he suddenly decided to go into show business.

In 2003, Blunt moved to LA, where he worked with a producer Linda Perry. He spent days and nights working on his first studio album.

In 2004, Blunt released his first album Bedlam, which became an overnight hit. The LP topped UK Albums chart as well as most of the popular European charts. It reached the 2nd spot on Billboard 200. The album sold over 11 million copies worldwide. It was certified platinum in UK 11 times and 14 times in Ireland.

In 2007, James released his second album Lost Souls, which was even more popular than his first LP. Again, the album topped all European and UK charts but reached only the 7th spot on the UK albums chart.

James released three more albums Some Kind of Trouble (2010), Moon Landing (2013), and The Afterlove (2017). The first two were very popular in the UK and Europe. The third one is gaining popularity. James currently performs live and works on new songs.