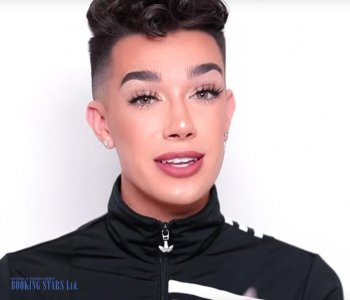 James Charles is an American YouTube personality, make-up artist and well-known social media celebrity. James is the most-followed beauty influencer on YouTube. In 2016, James was named the first male CoverGirl ambassador. The internet personality has done make-up for celebrities like Kylie Jenner and Iggy Azalea.

James Charles Dickinson was born on May 23, 1999 in Bethlehem, New York. Growing up, James attended Bethlehem Central High School and graduated in 2017. He came out as openly gay.

Charles is best-known for his YouTube channel, which he first launched in 2015 in high school. He has since grown to become the most popular beauty-related YouTube channel. On his channel, he posts a variety of make-up-related videos focusing on tutorials, day-in-the-life videos and make-up application videos. His videos have more than two billion views.

Some of his most popular uploads include a video of him applying Kylie Jenner’s Halloween make-up, him doing Charli D’Amelio’s make-up and him buying a fake replica of his make-up palette.

In addition to his popular YouTube channel, James boasts an impressive total social media following with more than 70 million followers across all his channels. Since joining TikTok, he has become one of the most-followed celebrities on the platform.

In 2016, James was named the first male CoverGirl ambassador in an unprecedented move for the company. In an interview with the New York Times, James said he screamed and cried when he found out he would be the first-ever male ambassador for the company. He said the appointment shows that the beauty industry has increasingly become more genderless.

In March 2019, James did Iggy Azalea’s make-up for her new music video “Sally Walker” where he also made a cameo appearance in the music video.

In 2020, James confirmed his YouTube series “Instant Influencer,” hosted by Charles, would premiere on the platform. The show hopes to find the next beauty influencer.

Charles has come under fire for a number of things he has said and done since becoming a social media celebrity. In 2017, when he was just 17 years old, the teenager tweeted a joke that was offensive to Africans and Ebola. He later apologized.

Two years later, in 2019, Charles said in an interview that he was not fully gay and said he has found different women and men attractive. Some people claimed his comments were transphobic and he received some backlash, to which he apologized.

Perhaps his biggest controversy to date involved former longtime collaborator Tati Westbrook. Tati posted a 45-minute video on her YouTube page on May 2019 heavily criticizing James, claiming he manipulated people’s sexuality and used his fame and power to play with people’s emotions.

Once the video was posted, James broke a YouTube record: he lost more than one million subscribers in just 24 hours. Following the scathing video, he lost millions of followers.

Later, Charles uploaded an eight minute video responding to her claims and apologizing. His video received negative feedback from his fans and quickly became one of the most disliked videos on YouTube.

Charles then uploaded a video titled “NO MORE LIES.” At 41 minutes long, the video dived deep into the drama and provided evidence to fully refute some of the claims that Tati had made. Fans turned back to supporting Charles and as a result, Tati lost many of her YouTube fans while Charles gained many of his back again. Tati later removed the original scathing video from her channel and the following year said she had been pressured to post the video by Shane Dawson and Jeffree Star.