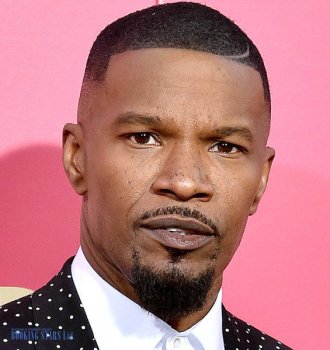 Jamie Foxx’s real name is Eric Marlon Bishop. He was born on 13 December 1967 in a small Texan town, Terrell. The artist became popular in the world of cinema for his role of Ray Charles in the biographical movie, Ray. The movie helped Jamie become the third African American to receive an Academy Award. Today, Foxx is mostly known for his roles in such movies as Ali, Django Unchained, Collateral, and White House Down. Even though he is a famous actor, Jamie finds time for a music career. So far, the singer released 5 successful albums and 18 singles.

Eric Bishop was born in the family of Darrell Bishop. However, soon after his birth, the boy was adopted. Sometimes, Eric saw his biological parents, but they didn’t help to raise him. In one of the interviews, Bishop said that his most influential relative was his adopted grandmother. She was the one to help him start playing the piano when the singer was just 5 years old and introduced him to classical music. When the artist was young, he loved playing football and dreamed of playing for Dallas Cowboys.

Eric changed his name to Jamie Bishop when he started doing stand-up comedy. Part of the name was taken in honor of another popular comedian and actor Redd Foxx.

Foxx’s acting career began with a small role on a TV show Roc. In 1991, he was noticed and accepted as part of the cast in the show, In Living Colors. His characters were so lively and memorable that the young actor acquired an army of fans.

Jamie’s first big role was in an Oliver Stone’s drama Any Given Sunday in 1999. He was invited to portray a football player because he had experience with the game. The movie turned Foxx into one of the most talked about actors in Hollywood.

The next important role was in the movie Collateral. He played a taxi driver, Max, and earned numerous positive reviews from the critics. The artist was nominated for an Academy Award for the best supporting role. He finally got the award for his role in the movie Ray in 2004. Next year, Jamie got an opportunity to join Academy of Motion Picture Arts and Sciences.

After that, the artist got an offer to work on three movies, all of which became commercially successful and turned Foxx into one of the highest paid actors in Hollywood. In 2007, Jamie got a star on the Hollywood Walk of Fame. He called that day the happiest day of his life.

Foxx achieved big heights in the music world as well. He earned nine Grammy nominations and received one Grammy Award.

His debut album Peep This came out in 1994. The artist’s career took off when he helped Kanye West record his single “Slow Jamz”. The song topped Billboard Hot 100 and came in third in the UK.

The next time, Jamie worked with Kanye, the artists recorded a single “Gold Digger.” It stayed on top of Billboard Hot 100 for 10 weeks.

In 2005, Jamie worked on the hit “Georgia” with Ludacris and collaborated with Field Mob. At the same time, 50 Cent invited Foxx to record his song, "Build You Up" which became part of his album, The Massacre.

Jamie released his new LP, Unpredictable, in 2005. It became platinum in the USA, sold almost 600,000 copies in the first week and almost 2 million after that. The singer got an award for the most sold album in the USA. Many fans wanted to book Jamie Foxx for private events.

In 2006, the singer got a BET award for the Best Collaboration for the song “Blame It” with T-Pain. The same year, Foxx was nominated for a Grammy Award four times.

The third LP, Intuition, came out in 2008. To record the album, the artist invited such famous rappers as Kanye West, TI, Ne-Yo, Lil 'Kim, and T-Pain. The music video for the lead single “Just Like Me” became a hit. The second single “Blame It” made it into the top five of Billboard Hot 100 and topped Billboard Hot R & B / Hip-Hop Songs Chart.

In 2010, Foxx recorded a new album, Best Night of My Life. The top singles were “Winner” with Justin Timberlake, “Living Better Now” with Rick Ross, and “Fall for Your Type” with Drake. The LP came in second on Billboard Hot R & B / Hip-Hop Songs Chart. The same year, the artist started working with RCA Records.

In 2015, the Jamie presented the new album, Hollywood: A Story of a Dozen Roses. It topped R&B / Hip-Hop Albums Chart and came in 10th on Billboard 200. In 2017, the artist became an executive producer and the host of the TV show, Beat Shazam.