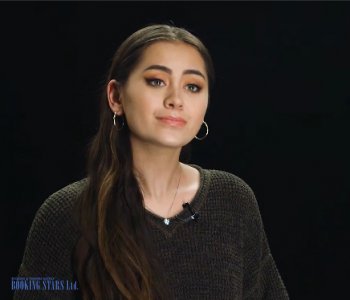 London-born singer/songwriter Jasmine Thompson was first noticed at the age of 13 for her YouTube videos covering various songs with her particularly smoky, eerie voice. After racking up millions of views of her videos of Taylor Swift and Naughty Boy covers, Thompson began receiving regular radio airplay on the BBC as well as gaining an expanding online fan base. Her cover of Chaka Khan's "Ain't Nobody" was used in an advertising campaign for the U.K. supermarket chain Sainsbury's and soon climbed the British charts. In September of 2013 she self-released her debut album, Bundle of Tantrums, and continued to upload new videos. A month later, she followed the album with an EP titled Under the Willow Tree. In addition to releasing her own music, Thompson has collaborated with artists in the dance/EDM community, most notably with German DJ/producer Robin Schulz, who enlisted her to sing on his 2014 track "Sun Goes Down," which became an international dance hit. In early 2015, Thompson announced that she had signed with Atlantic Records and headed to the U.S. to collaborate with pop songsmiths like Jesse Shatkin and Emily Warren. Her first single for Atlantic, "Adore," arrived that spring with the Adore EP released later that year. After the release of Adore, Thompson released 15 different single tracks to streaming services between 2015 and 2017, collaborating with the likes of Hugel, Eden Prince, and Felix Jaehn, whose "Ain't Nobody (Loves Me Better)" topped the German singles charts for eight weeks. Her sophomore EP, Wonderland, arrived in 2017 and featured songwriting contributions by Meghan Trainor, Ross Golan, Julia Michaels, Justin Tranter, and others. The Trainor co-penned single "Old Friends" appeared on Grey's Anatomy and was remixed by Jonas Blue. Returning in early 2019, Thompson issued a handful of singles which then appeared on her Colour EP released in March.