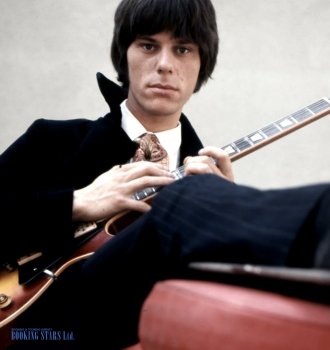 Jeff Beck was born on June 24, 1944, in England. He is a guitarist, singer, and composer mostly known for his work with The Yardbirds. He also founded the bands The Jeff Beck Group, and Beck, Bogert & Appice.

When Beck studied at Wimbledon Arts College, he already played in the group called Tridents. Soon Jimmy Page recommended him to the band The Yardbirds as a great guitarist to become a replacement for Eric Clapton, who recently quit. Beck worked with The Yardbirds for two years. He changed the sound of the band’s music by introducing his own special guitar riffs.

In December 1996, Beck left The Yardbirds and signed a contract with Columbia to start a career with The Jeff Beck Group.

In 1967, The Jeff Beck Group went on a tour in England. Back then, the lineup included Rod Steward, Ronnie Wood, and Roy Cooke. A while later, Cooke was replaced with Micky Waller. Soon a keyboardist Nicky Hopkins joined them. These band members released two studio albums Truth and Beck-Ola. Both of them were successful.

In 1973, the previous band members decided to come back to the band and Jeff formed a project called Beck, Bogert, Appice. The band released one album with the same name, went on one world tour, and fell apart.

Since then Jeff Beck started working solo. He recorded 17 studio albums and 16 singles. Beck holds a variety of awards, including 8 Grammies. Jeff continues to record new songs and performs live.