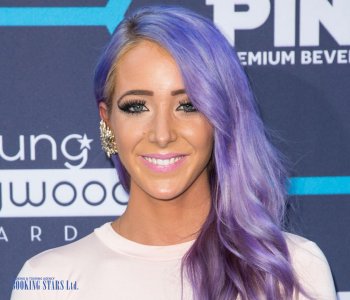 Jenna N. Mourey (born September 15, 1986), better known as Jenna Marbles, is an American YouTube vlogger and occasional sketch comedian who has been active since 2010. With over 18 million subscribers and over 2 billion views, she is currently one of the most popular YouTube personalities, reaching her peak in the middle of 2013 as the second most popular personality on YouTube behind then leading channel, Smosh. She appeared on the Smosh main channel video, The End of Christmas (Part 2) the same year as a Muppet, as well as the Smosh Babies episode, Anthony's Sister (Smosh Babies).

In 2014, Ian portrayed Jenna in the video HOW TO BE A YOUTUBE COMMENTER.

Jenna also appeared as herself in Smosh: The Movie. She also makes an appearance in EVERY SMOSH VIDEO EVER, where she makes fun of Ian and Anthony overusing the word "bitch".

Additionally, she was one of the guest hosts of Internet Icon featuring Smosh, PewDiePie, nigahiga and Timothy DeLaGhetto in July of 2013.