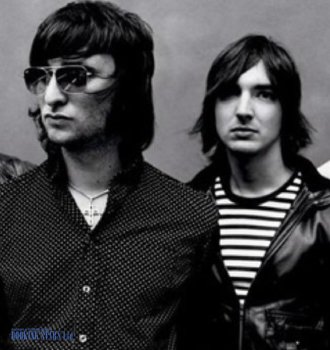 Jet was formed in 2001 in Australia by brothers Nic and Chris Cester, who invited Cameron Muncey and Doug Armstrong to join the band. A little later, they were joined by an old friend of Chris’, Jason Doukas. The young musicians chose a short name for their band, keeping in mind the British rock group Wings. While performing as an opening act for a local but already famous punk group The Specimens, Jet started earning popularity. Shortly the band was joined by Mark Willson, who replaced Doug Armstrong.

In 2002, the band released its first EP Dirty Sweet. It sold only about 1,000 copies but they went off like hot cakes. Elektra Records noticed the band and offered it a contract. In 2003, the company rereleased the EP.

The band members realized that in order to earn international popularity, they need a more professional approach. So Jet went to the USA, where it recorded the first debut album with the help of a famous producer Dave Sardy. The LP Get Born was released in 2003. It topped ARIA charts and reached the 26th spot on Billboard 200. The album earned eight platinum certificates in Australia.

Suddenly, The Rolling Stones noticed the band and offered them a chance to join the famous group on its Australian tour as an opening act. Jet immediately agreed. From that moment on, Jet became a very busy touring group. In 2003, the musicians performed at more than 200 concerts.

Back then, their most popular singles were "Are You Gonna Be My Girl" and "Rollover DJ". The first song became a soundtrack for the video games Guitar Hero: On Tour, Rock Band, and Madden NFL 2004. It also appeared in the animated movie Flushed Away (2006) and in What Happens in Vegas (2008). The second song was featured in the video game Gran Turismo 4.

In 2004, Jet toured the USA. The new song "Hold On" was featured in the movie Spiderman 2. While the song "Cold Hard Bitch" topped Billboard Mainstream Rock Chart. The same year, the band got an award at 2004 MTV Video Music Awards. In Australia, they received six ARIA Music Awards.

In 2006, the band released their second album Shine On, which consisted of 15 songs. The LP went platinum in Australia but, compared to Get Born’s eight platinum certificates, it was a step back.

In 2007, their new song "Falling Star" made it into another Spiderman movie while "Rip It Up" was featured in the animated movie Ninja Turtles.

In 2008 and 2009, the band was working on a new album, Shaka Rock, which was eventually released in August 2009. "Killed in Action" from the LP became the fifth most popular song on the Australian radio stations. Another single from the LP "She's a Genius" sold over 35,000 copies and earned a gold status.

In 2012, in Facebook, Jet announced disbanding. However, in 2016, they decided to get back together. The tickets to their first concert sold out in a flash. The band continues working on new music and performing live.