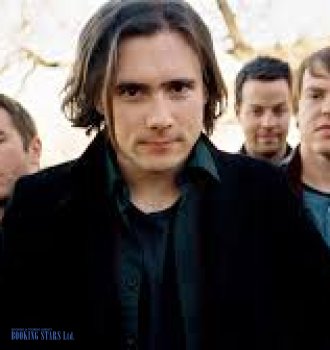 Rock band Jimmy Eat World was formed in Arizona, in 1993. The lineup includes Jim Adkins, Tom Linton, Rick Burch, and Zack Lind. They are mostly famous for such hits as “The Middle”, “Sweetness”, and “Pain”.

When the band just formed, they recorded a demo album One Two Three Four and their first LP Jimmy Eat World (1994) with an independent label Wooden Blue Records. This company worked mostly with punk, emo, and indie groups. Their first album wasn’t successful.

The band experimented with emo music. They started to perform at small clubs and festivals. Jimmy Eat World met many bands with similar music such as Christie Front Drive and Sense Field.

In 1995, the band signed a contract with Capitol Records. A year later, they recorded their second album Static Prevails, which failed to make the charts but brought the band some popularity.

In the next few years, the group recorded a few singles with independent labels. In 1998, they recorded the EP Jimmy Eat World and started working on their third studio album. The LP Clarity was recorded in two studios: Sound City and Lake Audio. Eventually, the songs were brought together at Bernie Grundman Mastering. The LP contained a few songs from Jim Adkins, as opposed to previous albums, where the vocalist’s role was exclusively Linton’s. At the moment of its release, Clarity was considered the best work of the band.

In 2001, they released Bleed American. It was the first album to make it into the charts and eventually get a platinum certification. The LP reached the 31st spot on Billboard 200 and 62nd spot on UK Albums Chart. The album included two hit singles “The Middle” and “Sweetness”. The group finally achieved international recognition.

In 2004, the band released their fifth studio album Futures. The singles “Futures”, “Work”, and “Pain” were hits. “Pain” earned a golden certification in the USA.

The band recorded 4 more studio albums, the latest one to date being Integrity Blues (2016). All their albums were moderately successful, reaching high spots on Billboard 200, UK Albums Chart and other charts. Jimmy Eat World is constantly played on MTV. The band continues to write new songs and performs live.