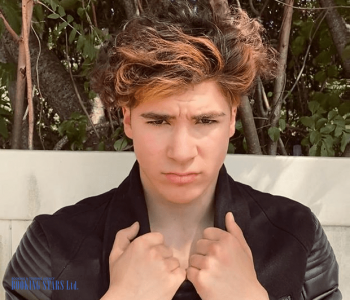 Joe Albanese is a social media personality and dancer best known for his work on social media. The young actor posts comedic videos with his mother and sisters in addition to breakdancing videos and trending content.

His content took off in 2019 and since then, he has risen to be one of the most successful TikTok stars. In 2020, Joe joined the TikTok collaborative Sway House and moved to Los Angeles, where he makes content with the fellow house members.
Career
Joe Albanese was born on December 11, 2001 in Connecticut. He has two sisters; his youngest sister, Bella, has also become popular on TikTok with more than 1 million followers.

Joe rose to fame on TikTok when he started posting comedic videos featuring his mother Denise and his two sisters, in particular Bella, in 2019. He first went viral, though, when he posted a video of himself breakdancing in his kitchen. Following that video, he started to grow his following and gain new fans.

The social media star said he has kept growing his following by acting fast and creating videos based on popular trends, but putting his own spin on them so the videos would be funnier and more entertaining to watch.

In 2020, Joe joined the collaborative group Sway House. The house, created by TalentX Entertainment, features some of the biggest stars on the platform. Stars like Anthony Reeves, Bryce Hall, Josh Richards and more are a part of Sway House and work together to collaborate on TikTok content and make it go viral. In addition, the stars are working to build their other social media platforms.

In addition, the stars live in a physical house in Los Angeles. Joe is represented by TalentX Entertainment.

In addition to his work on TikTok, Joe has gotten the opportunity to meet celebrities like Bebe Rexha. During Bebe’s concert with The Chainsmokers at Mohegan Sun, Connecticut, Joe went on stage.

The actor has expanded outside of social media and has also taken part in Bratz TV.